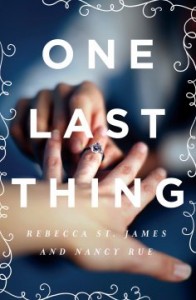 I will not lie to you, from one reader to another, this was a difficult book and topic to trudge through. It follows the last few weeks of one couple’s engagement, in which the main character, Tara, discovers her fiancé, Seth, is addicted to pornography and has to decide whether to further pursue the marriage and support her husband through his healing process or to pursue other opportunities. And while current societal expectations may suggest that pornography can be acceptable in an open-minded, communicable relationship with established boundaries, pornography can also be a severe obstacle that can destroy a relationship or marriage, based on the needs and beliefs of the couple. In One Last Thing, Rebecca St. James and Nancy Rue thoroughly explore the intricacies of a secret uncovered late in an engagement, how a relationship changes, and the decisions made about marriage and commitment.

What I really admired about this novel was carried through the development of the story and its characters. The novel opens with the lines, “What happened to Seth and me changed everything. Everything. And yet it began with a completely innocuous question: Where are we going to put the couch?,” which winds up generating a great deal of opportunity in the book: all at once, the couch becomes a centerpiece of the beginning of a relationship, a practice in negotiation, and a manifestation of unfaithfulness in a relationship. What I imagine is having a large orange couch in the middle of my otherwise-neutral living room and the couch visually screaming with memories every time I walked past it, looked at it, or relaxed on it. This display is similarly demonstrated through the central characters in the book and their behaviors; through Tara’s personal exploration of her feelings toward Seth and his behavior, there are recurring images and sentiments that evolve with Tara and Seth’s characters as they grow further apart in their relationship.

And while I admired how the authors handled the subject by way of story arch and parallels, I found myself intensely bothered by the portrayal of the main character and the writing of her internal thoughts and narrations. Many of her lines carry an air of “Well, I guess I have to do this now,” or “It’s such a burden on me,” which comes across, rather-immediately, as petty and self-absorbed. While I fully understand many of the complexities she is faced with in her oncoming marriage, I find myself unable to understand her or to feel compassionate for her, because of her “It’s all about me,” and “He’s the only one at fault here; there’s nothing I could do to make this better” demeanor. However, this is an issue that resolves itself by the end of the story; as I stated earlier, much of Tara’s character is explored through the evolving of the problem, and by the end, after (no spoiler) a dramatic change in Tara and Seth’s relationship and her apology to Seth for her behavior and attitude. Without this apology, and without this adjustment, I would have been highly bereaved at this story; so though it was difficult to get through part of the story and found Tara’s character difficult to get along with for much of the story, I found my way to acceptance through Tara’s admission.

Rebecca St. James and Nancy Rue’s One Last Thing is a really raw and lovely exploration of obstacles in a serious and long-term relationship and follows the sharp transformation of the characters on this journey. And while it is a really difficult read, it was worth the time, effort and emotional investment. I recommend steeling yourself and giving this a try.

REBECCA ST. JAMES has been a defining voice in contemporary Christian music for more than a decade. She is a three-time Dove Award winner, as well as a winner of the prestigious Grammy Award. In January 2007 she was voted Favorite Female Artist by CCM magazine readers for the sixth year in a row. She also recently received her fourth consecutive Best Female Artist Award from ChristianityToday. In addition to her success as a musician, Rebecca St. James is the author of several books, with combined sales of more than 350,000 copies. Her books include SHE: Safe, Healthy, Empowered; SHE Teen; Wait for Me; Sister Freaks; 40 Days with God; and You’re the Voice: 40 More Days with God.

NANCY RUE is the author of 122 books, including 11 novels for adults, 17 for teens, and 61 for tween readers, as well as 2 parenting books, 33 non-fiction books for tweens and teens, and the features for the FaithGirlz Bible. Her Lily Series, published by Zondervan, has sold well over one million copies. Her ability to relate to a wide audience has made her a popular radio and television guest and an in-demand speaker and teacher for writer’s conferences across the country. She has been a regular keynoter for The Young Writer’s Institute, Virtuous Reality Ministries, and Zondervan’s Beauty of Believing Tour for FaithGirlz. Nancy is the cofounder of the Writers Workshops held annually at Glen Eyrie, Colorado and also offers a one-one-one Writing Mentorship program and two-day intensives for small groups of writers. Her latest titles include the Christy Award winning Reluctant Prophet trilogy for adult readers (David C. Cook), The Whole Guy Thing (Zondervan) for teens, and the Mean Girl Makeover trilogy for tweens (Tommy Nelson, as well as the first of three novels written with Rebecca St. James for the New Adult audience, The Merciful Scar. A student of the Academy for Spiritual Formation, sponsored by the Upper Room, Nancy continues her own spiritual journey even as she writes and speaks for mothers, daughters, and would-be writers about theirs. For more information, visit her website at www.nancyrue.com. Nancy’s biggest passion is for anti-bullying, and is the co-founder with Thomas Nelson of the movement SO Not Okay.