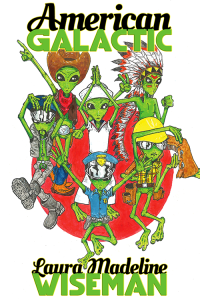 Click here to see my review of Some Fatal Effects of Curiosity and Disobedience.

We’ve all been there—wondered about life, the afterlife, and whether there could be life on other planets. These are interesting questions, because, to the common wonderer (someone who isn’t a scientist or theologist, and someone who hasn’t somehow miraculously died and come back to life, or, you know, been snapped up by aliens and sent back a millisecond later), they are relatively unanswerable. Somehow, the proof is always disproven, and, for some, going on faith just isn’t enough. And while I am one who chooses to have faith, about a variety of “unprovable” things, I do find myself asking questions of the extraterrestrial sort and am interested when these are presented in a creative form… but I am especially interested when the artist can portray something new to me on the subject, something beyond, “I don’t believe in aliens” or “There’s nothing truly out there to disprove my beliefs.” Laura Madeline Wiseman does an impeccably wonderful service in providing a wide scope of possibility on the subject of extraterrestrials/aliens/martians/whatever else you would like to call “them,” as well as a broader look into the gray areas of our beliefs.

Typically, I think of the Martian-phenomenon as being three-sided, and these three sides tend to be starkly black and white: 1.) those who do not believe in Martians, 2.) those who do believe in Martians and see them as a threat, and 3.) those who believe in a gentler, coexisting type of Martian… and then I read this collection of poems. I am absolutely in love with how this collection is working and how it pushes against our expectations; in particular, what I find so darn compelling about this project is the strangeness it invites in, as well as the blurring of the three-sided lines. For example, here is a set of horribly-haunting lines (I think I’m going to have to check my closets before I can sleep tonight) from Wiseman’s poem, “Creed: The Mission”:

Believe in versions of the truth.
Breathe. Hold hands. Hug. Recycle.
Hope that if there are Martians,
they wouldn’t be interested in you.

In the final stanza of “Creed,” we see a series of typically-normal behaviors—here is how we play human—which is then followed by a pair of lines that function as a warning; it implies, if the Martians take interest, there will be consequences. Keep out of sight, stay low, act normal, you’ll be fine. And what is so compelling about this move, about this warning, is the mixture of positive, negative and foreboding references throughout this collection. Despite the curiosity of Martians, and the depictions of these creatures as potentially-gentle, there is also this looming possibility of danger, of being noticed, and of things happening as a result of being noticed.

And perhaps what exaggerates this possibility even further, and makes it even more creepy (definitely checking the closets, the more I think about it), is Wiseman’s established isolation: whether we are imagining space as a sharp void, or witness a feminine being under the knife, or imagine our neighbors avoiding the observation of the Newcomers, these settings and beings operate as quiet and empty, nonintegrated floating objects—as if there were nothing to hide behind, and certainly no one to save us.

Not to mention my other favorite part of this collection, which integrates perfectly with this concept of isolation—Wiseman’s blurring of what makes a Martian a Martian, what makes us become the other, which places us ever closer to beings that could notice us. There is such an easy blurring that happens that makes us less like us and more like a predator—I’m thinking right now of a really great moment in Wiseman’s poem, “Getting Out of Here,” where, upon ending, we see government involvement, as a means to relocate us from one world to another:

And now I learn, that down the street,
NASA plants lettuce in a lunar greenhouse
to practice gardening in outer-space.

Isn’t that weird? Isn’t that so strange? And yet it makes all the sense in the world—whether or not NASA is involved, whether or not there are lunar plantations, there is still the fact that there is an easily-crossed line between prey and predator, between us and other. One of my favorite poems from the collection (actually, perhaps, my favorite) performs such a careful exploration of what it means to observe, to guess and make assumptions, and to take action, all of which can take on a deeply-ominous feel.

When the first Martians knock, I open the door
with a bowl of chocolate, suckers, and quarters.

The Martian eyes glitter. I ask, Who are you?
The Martians stay mute. Then a Fairy, Superman,

and two Military Specialists crowd the porch
holding plastic gourds. I extend the bowl of candy.

Thank you! says the Fairy whose wings shiver.
She dashes down the steps into the night.

Then Superman, the military, they all leave,
but the Martians remain. I ask, Where’s your mom?

I scan the street and note my neighbors
on their lawn pretending to be stuffed dummies.

As the Fairy climbs their driveway, they growl.
I study the Martians, glance up and down the street.

I do what any normal type person might do.
I take the limp hands and pull the Martians inside.

In this poem, which is so swiftly steeped in the other, we are preserved in this extremely isolated moment; it is as if no one is watching, and no one can help lead these children? martians? home. This is largely what I mean when I say isolation: that, while there may be other living things nearby, within sight, within hearing range, actions are not being performed to change the situation or to do anything more than observe.

Laura Madeline Wiseman has truly done something wonderful here; the fact that she’s got me thinking about otherness, isolation and martians on a sleeting day in March, and the fact that her poems are requiring me to check my closets and hallways before I can sleep restfully tonight, are both blessings and compliments—to her writing, and to the fact that I had the opportunity to read her poems. Please sit down and take some times with American Galactic; it really is beautiful.

LAURA MADELINE WISEMAN is the author of the full-length poetry collections Drink (BlazeVOX Books, 2015), Wake (Aldrich Press, 2015), American Galactic (Martian Lit, 2014), Some Fatal Effects of Curiosity and Disobedience (Lavender Ink, 2014), Queen of the Platform (Anaphora Literary Press, 2013), and Sprung (San Francisco Bay Press, 2012). Her dime novel is The Bottle Opener (Red Dashboard, 2014). She is also the author of two letterpress books, nine chapbooks, and the collaborative books The Hunger of the Cheeky Sisters: Ten Tales (Les Femmes Folles Books, 2015) with artist Lauren Rinaldi and Intimates and Fools (Les Femmes Folles Books, 2014) with artist Sally Deskins. She is the editor of Women Write Resistance: Poets Resist Gender Violence (Hyacinth Girl Press, 2013). She has a Ph.D. from the University of Nebraska-Lincoln in English and a M.A. from the University of Arizona in women’s studies. Currently, she teaches English and Women’s and Gender Studies at the University of Nebraska.