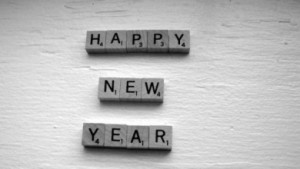 Happy New Year, all! I hope you had a wonderful celebration of the upcoming new year and were able to spend some time recounting the good memories of 2014. Along with going to school and becoming a mom, this was definitely a year for reading and reviewing books. I learned a great deal this year—about the art of reviewing and commenting on a text, about my personal tastes and what styles and moves in a text tend to stick with me the longest. Today, I went back through the list of books I read throughout the year and considered which books were the most influential. It was a difficult process. The five books I’ve included below were, both, among my favorites (which were far more than five titles!) and the most striking or memorable: the ending of The Art of Floating, the rhythm I swear I can still feel in my stomach after reading The Bottom, the blue room in The Language of Flowers, the opening poem in Trances of the Blast, and the hilarity of the narrator and the purity of the baby in What Looks Like Crazy on an Ordinary Day… These were such beautiful books, and whether read at the beginning of the year or more recently, they have stayed with me more than my other titles in 2014.

Because it was so difficult to even narrow down to five titles, I’ve decided not to rank them in an particular order; I’ve simply put them in alphabetical order, by title. 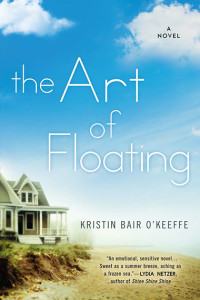 THE ART OF FLOATING by Kristin Bair O’Keeffe, Penguin/Berkley, 2014
What can I say? This was easily one of the loveliest books I have read in a very, very long time. Termed by some as a fabulous beach read, I walked into the experience expecting a love story and only a love story, but it proved itself to be so much more than that. Teeming with surrealist images and ideas, this book combats what it means to feel something—how we often have to turn to metaphor in order to get our thoughts and feelings across. It’s a project that lives in that literary stance of, “I know the image doesn’t make sense, per se, but it’s right.” Real, honest, raw. 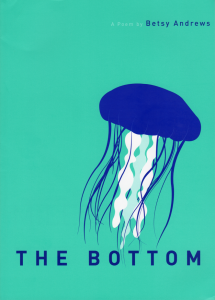 THE BOTTOM by Betsy Andrews, 42 Miles Press, 2014
Such a beautiful book! As of a few years ago, I became extremely interested in the placement of ecological concern in writing—particularly ecopoetics. What’s interesting to me is how Andrews pushes the bill and makes The Bottom much, much more than an ecopoetic piece; it’s ecopoetic, yes, but it is also political (different, in my mind, from ecopoetic), rooted (in a sense) in pop culture, and pulling from very deep ties in folklore and oral tradition. It also challenges common conceptions of the ocean, who lives in it, and who is impacted by their loss (spoiler: all of us). Deeply rendered, an oceanic rhythm, and shockingly resourceful and smart. 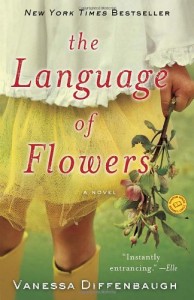 THE LANGUAGE OF FLOWERS by Vanessa Diffenbaugh, Ballantine Books, 2012
There is something especially interesting about the concept of etymology (besides the fact that I love language)—how such a study is like a constant search for origin stories, for new meanings, and (my favorite part) varying and debatable interpretations. This concept is not overly-present in my work, as of yet, though it certainly something I am working on introducing, and something I greatly appreciate in others’ work. The Language of Flowers truly thrives inside etymology, both, as origin stories for the names of and purposes of species of flower but also how wrong an interpretation can be… and what that can mean for the portrayal and giving of a bouquet. Haunting and lovely. 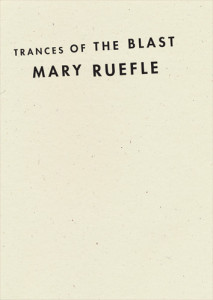 TRANCES OF THE BLAST by Mary Ruefle, Wave Books, 2013
I’ve always had a particular soft spot for Mary Ruefle’s poetry, though Cold Pluto has always been my favorite of her collections; there is a certain seamlessness and confidence to the collection of poems, their order and imagery, that I did not find as competitive in her other works (though I loved them, as well; Cold Pluto simply became my favorite). Now, however, Trances of the Blast came into my view, and it is absolutely wonderful. I sat one day with just Cold Pluto and Trances by my side, and it made for a truly wonderful day. An imagistic, confident and wonderful day. 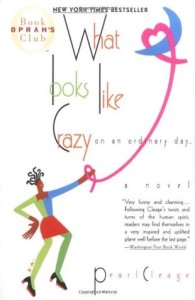 WHAT LOOKS LIKE CRAZY ON AN ORDINARY DAY by Pearl Cleage, Harper Paperbacks, 1997
Not a new book but one that was gifted to me for Christmas 2013; my friend “warned” me that it was a strange read but easily one of her favorite books, ever. This intrigued me, and from the first page onward, I understood what she meant. What Looks Like Crazy is bold and funny, operating in that strange place where grief and laughter strangely, funnily, and tragically coexist (which reminds me constantly of Cleage’s stance in playwriting, and how that stance influences the poise of her fiction, in the best way possible). It’s beautiful and memorable, dark and hilarious, easily a book I will return to—and gift and gift and gift.

I’m pausing for a moment and just thinking of how wonderful of a year it’s been. The past several years have each been difficult or heartbreaking in their own ways, and 2014 was the first year in a while where I reached some sort of reprieve—where my husband and I both reached some sort of reprieve—from hardship. And I think that’s been demonstrated, too, in the books I’ve read; when I first came to terms with my five “favorite” picks of 2014, I nodded to myself and said, “Yes, these titles represent me—in what I need as a writer and, perhaps more importantly, what I need as a reader and individual.” These five titles aren’t just memorable and books that I will read again in the future (and look forward to reading again in the future). They were beautiful, and they were hopeful, and challenging, and they were crutches for me during a year of healing. They were confirmation that, yes, this could be a better year than the past few, and they were a constant reminder that there is beauty to be found amidst all of the chaos. They were books I could set aside for later, to return to when things get rough again, because they always do… and to remind me that things will also get better again.

Because they always do.

And, finally, a belated wish to all of you, from a writer I’ve been reading for a very long time, as we turn to 2015… 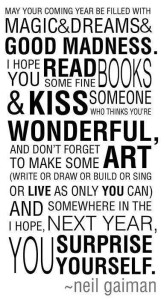