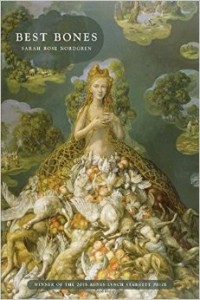 Before I get started, I have a (positive!) confession to make: I wrote this review four times. I read a lot of poetry, but it’s rare to discover a collection that is unique in its severity, one that equally makes you cringe and keeps you reading with mutual ease. And this, by far, was one of those collections, so much so that I found it difficult to put my admiration into words. Sarah Rose Nordgren creates in her collection, Best Bones, the most beautiful disparate meaning through her pairing of the subtle and the severe; and much of this is achieved through her complicating of subject matter, as well as her imagistic language, choices in enjambment and linguistic choices that create double-meanings in and of themselves, all of which manage to carry their own weight but also generate a hurt-engine that becomes all their own. Admittedly, this is a longer review than I at times write, but I wanted to showcase several of my favorite poems, which also demonstrate my three favorite aspects of Nordgren’s poetry: her choices in line breaks, her generating of double-meaning at the level of the line, and her powerful pairing of the subtle and the severe.

Perhaps there is such a thing as doing too much of this, but I am one of those readers who spends a great deal of time familiarizing myself with how to read an individual poet and their poems—and much of that work occurred via the following poem, actually the opening open in Nordgren’s collection, “Fable”:

I pull myself from the water by my hair

Shake the leaves out of sleep

I perch on a child’s bicycle

Frayed with lace through winter

Growing back to perfection

I am the oldest daughter in the story

The one whose shoes floated downstream

Who baked bread in an underground oven

Barefoot before the king

So far north now and west of Helsinki

I make my nest and lie in it

Run furrows with my fingers in cold so close

I found myself spending time hanging in this poem’s line breaks and appreciating how the meaning transforms across the enjambments, and I learned that this is something that Nordgren readily uses, and uses well. Looking at this poem specifically, I am in awe of the power of isolating an image and what that can do for the meaning of a poem; for instance, the first three lines: “I pull myself from the water by my hair / Shake the leaves out of sleep / When garage-entombed at night,” which forms this strange suggestion of ridding oneself of water, or a dream?, while confined in a tight, rugged location. And yet, when we reach the fourth line, the narrator is moved from pulling herself from the water to “perch[ing] on a child’s bicycle”—an instant transformation of the moment. What’s interesting to me, perhaps a minor thing, is the capitalization of the first word of each line, which suggests to me that these lines can be read independently, as their own images, as their own ideas, that are instantly transformed by the coming and going of the surrounding lines. Such a reading generates for the reader a dreamscape that is ever-changing, which can be all the more frightening, and welcoming of the terror and rawness we often find in Nordgren’s poems, in its impermanence.

Now moving from the line break to the line itself, I also really love how Nordgren employs double-meaning as another form of transformation and subjectivity. In her poem, “Our Furry Friends,” I found myself asking questions of ownership and identity, as well as the thin line between the acts of caring and revoking rights:

Slaves we coddle in the kitchen.
Collar and stroke into loving
our way, the clang of a silver
knife across the plate. We love your secret
colors displayed through plastic,
separation of bone from flesh,
familiar shade of blood rising up
from the fat. It’s all so easy:
the best parts fall right off into our laps.
Since you are harmless,
you must not suffer like we do
when our skirts are raised to our waists.
O to peel back your skin and wear
your innocence out on a Saturday night!
Our fluffy rumps and wobbling
heels almost suffice. So happily
we digest each thrust and slice to be
nearer to you, whose blank eyes
flutter like checkbook pages.

This poem emotionally hurts me, because it an extremely powerful tool by way of double-meaning and equating. At the opening, and also implied by the title, we are confronted with questions about domesticity and the “nobility” of pet ownership, which then transfers, startling-quickly, to packaged produce and the wearing of skins, and, “finally,” the “blank eyes / [that] flutter like checkbook pages” of the animals we have harmed and killed, which creates a jarring and painful link between domesticating animals, harming them and consuming them. These transitions alone make for a powerful and memorable poem, but there is also Nordgren’s technique—this poem taught me that Nordgren not only uses her techniques of choice well, but she also repurposes them: moving from the double-meaning implied in her enjambment, we arrive at the double-meaning of the line. In the passages I referred to above, we are led to question the placement of victim and consumer, or loved one (a pet) and prey. For those of us with our own furry loved ones at home, this can be terrifying for us and drag us into questions of fairness and domestication—

—which brings me to my final, and favorite, point: Nordgren’s combining of the subtle and the severe. What my little internal references, my previous observations and these poems have been leading up to is this: the terrifying tell-all of these poems is located in the combining of the subtle and the severe, or as I’ve come to see as the heart of this whole aching, honest and raw machine. Take “Still Birth,” for example:

The wall should be strong enough to break
the force upon it. Wind tunnels
right up the street from the sea, battering
the glass, forcing itself through wooden
slats, and the pages of the book
flutter crazily. Content usually roots
story to ground, but I sense it
shivering around you when you turn
half-asleep in bed, disturbed. You wake
from the story I was telling like
the second half of the book fell
into the water when the binding
gave, replaced with the sound of rushing.
The introduction was too long, but
the invisible boy had already traveled
for a year and a day, had tamed
the wolf in the lightless forest, fought
the man with the giant red face, but
he had not yet bought the globe that
(he would discover) could take him anywhere,
Not yet come upon the broken eggs
with pennies inside. Though you know
the story, I mean to remind you
he will, eventually, return. Not in body,
no, but every time I tell it he becomes
more real. This is one of the stories
we live in against nature—I was trying
to tell you over the wind. If you learn anything
from living in this house, it will be how
to survive a variety of interruptions.

This poem combats my emotions in a way that so few poems can, starting with its subject matter. Though the poem is technically perhaps about the narrator telling a story to the addressee, who fell asleep because “the introduction was too long,” there is also a strange implication here, through the boy’s character, of a lost child—perhaps a stillbirth or an abortion—who had gone through all of these troubles (having “already traveled,” having “tamed / the wolf in the lightless forest,” or “fought / the man with the giant red face”) and yet had not survived, but who was “becom[ing] / more real” through the sharing of his story. Though this is only my interpretation of the poem, and perhaps too much of a reading-into because of being a new mother, this poem still suggests to me the unpredictable pairing of not finishing a story (the subtle) with having lost a child (the severe). Whether or not this one in particular is an accurate interpretation, there are other such dramatic pairings—even simply going back to “Our Furry Friends” in the pairing of domestication with consumerism. All-in-all, this collection largely centers itself around conviction and purity, with unusual and well-earned judgments of those who fall short.

Sarah Rose Nordgren has created in her collection, Best Bones, a stark and beautiful rendering of the many preying and sinful aspects of our society and poses a figurative finger that challenges us for better, more pure behavior. I can hardly tell you how beautiful this book is or how much I loved it or how many more times I want to read it, but I can tell you that you need to take the time to emotionally invest yourself in these pages. It’s demanding and raw and lovely and is so desperately worth your time. You won’t regret it for a second.

SARAH ROSE NORDGREN’s poems have appeared in Agni, Ploughshares, the Iowa Review, the Harvard Review, the Literary Review, the Best New Poets anthology, and elsewhere. She is the recipient of two fellowships from the Fine Arts Work Center in Provincetown and an Individual Excellence Award from the Ohio Arts Council. She lives in Cincinnati, Ohio.

It's a beautiful day for Gratitude. . I'm comple

Thank you to R.T. Heath @rtheathwriting for this W

"Feeding the Worms" by Danusha Laméris from BONFI