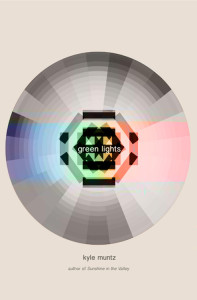 Dreamscape; Existentialism; Echoes of Religion and Tradition—these, among others, represent the themes that are presented to us, and challenge us, in the reading of Kyle Muntz’s Green Lights, a novella structured within a surrealist neighborhood that responds to and depends upon the current spectral landscape.

That is to say, color, and the narrator’s fixation on and repetition of the phrase, “I want to talk about color.” Whether or not this is a literal reference to the desire to discuss the color spectrum, and whether or not this desire is ever achieved, is somewhat unanswerable within the context of this work. Green Lights, from very early-on, becomes a dreamscape. This is not to narrow the focus of the novella, or an attempt to devise one umbrella term for it; rather, it explains some of the expectation, and even the overwhelming acceptance, of the surreal, the unreal, the sublime, as they are presented through these various worlds of color, strung within the landscape of one neighborhood.

Imagine, for a moment, one of your strangest dreams in which you felt the need to do something, to achieve a particular goal; you were then probably met with distractions, diversions, tangents, that all at once abstracted that goal, even buried it, until such a time came that an event, a sight, triggered a reminder of that earlier goal. Until that occurs, however—until the narrator can again say, “I want to talk about color”—those distractions are perceived as real (as normal, even) until such a time comes that the actual goal, the reality from which the dream is based, can be presented as a contrasting point, and the strangeness of those previous occurrences, upon awakening, can be scrutinized. Without that contrasting point, without that goal, though, all the strangeness contained in that dream can simply exist without further explanation—which would, in turn, allow some of the beauty of the surrealist aspects of the story to deflate (as the surreal has a way of not only normalizing itself within the context of a piece, but also spends some time drawing attention to itself, its weirdness, and its weird beauty).

What becomes so fascinating about this repetition of a fairly-simple want—the desire to talk about color—is not only the return to it, from strange observations of large flowers and a man eating children and a talking octopus, but how its simplicity draws greater attention to the impact of these colors on the neighborhood and its inhabitants within. We find ourselves—or, at least, I find myself—looking for patterns in this varying spectrum: How does the narrator’s mindset change from color to color? How do we explain E’s disappearances? The connections between the moon and the girl with the violin and her hiding places? The octopus? The man who eats children and later attempts acts of sacrifice? How do these inhabitants, this neighborhood, change with the passing of colors—everything in green, everything cast in a blue light, seeing red, et cetera?

Can we actually create a correlation between color and act, color and mood, color and the mind?

Perhaps, if given enough time, we could—but I don’t think that is the point. Given that this is a surrealist piece, and (in my mind) a dreamscape of sorts, such a set of correlations would ultimately contain exceptions, inconsistencies, and would fall apart. And that is the point. While the narrator may be under the guise of wanting to talk about color, trying to portray specifics of what can occur within each color-scape would be overly systemic for something so rooted in the surreal . . . But this fascination with the correlation between color and mind, however brief, remains so because of our very-human desire for explanations, for answers, which dreams often do not (cannot, will not) give us, just as the surreal doesn’t.

. . . Which is perhaps where the importance and power of the existential, and even religious, ties come into play. I’ve come to expect certain complexities in Muntz’s work, including (but, by far, not limited to) questions rooted in existentialism: Why am I here? What is my purpose? What do these happenings mean? While Green Lights does not constantly ask these questions verbatim, they are rooted, both, in the happenings of the story, from color to color, and in the narrator’s reactions to and thoughts about such happenings. Such moments as the narrator’s interactions with M, or the confrontation with the octopus, or the inability for the moon to remain out of the sky forever all point to this larger interconnectedness. What’s interesting, too, are the subtle elements of religion and even tradition that occur in the text—from M’s ritualistic act with water that seemed to take root from a Native American wake, to the ritualistic aspect of sacrifice with the old man. These moments, when paired with the more existentially-rooted questions, stand out against the dreamscape, because (whether or not they are occurring in a dream-state) they are real to us, these questions and the desire to connect, whether or not the situation in which they are presented is unusual, or even impossible, in waking context.

Kyle Muntz’s Green Lights may, at the foundation, be about the goings-on in a town in which a color spectrum is highly integral and what occurs in these various color settings, but when we begin to look deeper, at all the layers beneath, we find questions of possibility and purpose, and observations of joy and wonder, weirdness and beauty . . . We find life, in all its complexity and strangeness, through one of the scopes of greatest potential for exploration and observation: the dreamscape. This novella, while complex and with many possibilities of interpretation, leaves itself open to our intentions of connection as readers, while continuing to confound us and present us with new avenues through which these characters may traverse and transform and grow, with us and before us.

KYLE MUNTZ is the author of three novels and two novellas: Green Lights (Civil Coping Mechanisms) and The Crippled Giant (forthcoming from Mixer Publishing). Recently, he’s also the writer and designer of The Pale City, an independently-produced role-playing game for PC.