The Waking, Danger & Consent of the Body & Love: Reading Lisa Mangini’s Bird Watching at the End of the World 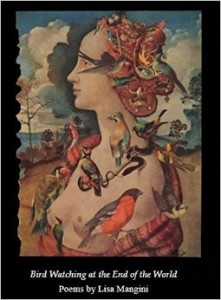 When we spend a lot of time reading poetry, I know we can become critical of the pursuit of love and the defining of boundaries in poetry—but sometimes, a poet chooses to address these exact topics, and they get everything right: they create something new, something meaningful, something entirely worth reading, whether it is within the context of poetry or not. Lisa Mangini makes this exact achievement in her premiere full-length collection, Bird Watching at the End of the World, as she addresses danger as it relates to the body, various forms of physical awakening, and hope, and the complications that come along with it. These poems are incredible, and unique, and lovely, and they invite us with such great ease to consider questions of our reality, of our awareness, and our consent.

Because this is a complex collection, I found myself beginning to categorize the poems, in a sense. While the collection is much deeper than this, I began to see the collection as exploring two story lines: the medical ups and downs of Mabel, who is primarily addressed as a “you” in her poems, and the otherwise growing-up of the central narrator, focusing on childhood, sexual awakening and the maturation of a romantic relationship. What is so fascinating about these two story lines is not only how they explore varied themes, but how these two story lines complicate the themes of the other.

For instance, there is the role of danger that appears in these poems, in the form of the medical, the mechanical and the everyday. As an example, I would like to share one of Mangini’s “Mabel” poems, a poem titled, “This is Your Body Speaking (ii),” which appears in a series of poems by the same name, inserted throughout the first section of the collection:

THIS IS YOUR BODY SPEAKING (ii)

It is impossible, you think, to identify
anything in this nearly all-black
celluloid of your guts. You think back
to tenth-grade biology, but can recall
only the stench of formaldehyde,
the serene look upon the piglet’s face.
You think you recognize the white tines
of ribcage, the twin kidneys, the long
crinkled streamer of small intestine.
But on a large slab of gray, you see
the white mass—which you do not
recognize from any diagram—
round and obvious as the moon,
and somehow, whatever it is,
know it can shift the tide inside of you,
send everything swaying in its pull.

Though this poem doesn’t overtly represent every form of danger addressed in this collection, it touches on the medical and, in some ways, the mechanical. Like many of the medically-focused poems in this collection, there is a thorough examination of the body and isolates its parts: “the white tines / of ribcage, the twin kidneys.” And there is also a hint of the mechanical in the “formaldehyde” and the “large slab of gray,” even the reference to “any diagram,” which not only points us to man-made products and scientific exploration but the acquaintanceship of the body with these objects. Some other poems more thoroughly explore the mechanical, though, as well as the everyday, in the form of a car or an MRI machine, even a shopping cart or childhood heirloom. These forms of danger lead us to a place not only of fear, but of isolation and intrusion. These poems are wrought with feelings of fear, pain and sadness, yes, but due to the isolation of a person that occurs during an MRI, or while riding in a car, and due to the isolation of body images, there is also a sense of hopelessness and loneliness. These poems are incredibly focused and lovely in their authenticity and thoroughness, and these explorations of areas and reckonings with the body are among the most memorable aspects of these poems.

And these explorations are deeply, deeply connected to the various forms of awakening that occur in these poems—the sexual, of course, and the medical, too. Several of these poems—again, not the one I have included in the review—address sexual awakening, the strangeness of it, the things that surprise us, that we fail to expect, but even more poems explore the strangeness of medical procedures, which in a way interact with our bodies in the same ways as sexual intercourse: disturbing, disrupting, surprising, intruding… But little is said about our agency and our ability at consent, because so much about medicinal procedure is implied as agreeable after signing paperwork, despite all of the intrusions that may occur, depending on a body’s needs. Understandably, it’s strange to think of these procedures in this way, but I feel Mangini’s poems do explore the medicinal from this strange angle, largely because it is a viable concern—besides the fact that it is interesting to think about. So much about these poems is rooted in truth and the strangeness of truth, which can be so deeply explored through our physical connections to the world and where truth resides.

Despite all of these remarks of intrusion and danger and negativity, there is also a sharp glimmer of hope—even if it is complicated. Beginning in the second section, poems about a successful, healthy, long-distance relationship begin to appear, and they are both lovely and extremely hopeful. However, staying true to the other poems in the collection, there are slighted reminders of isolation contained in these poems, as you will see below, and there are also poems that seem to operate in another dimension, describing a similar long-term couple in the third person, but who are also struggling with a terminally-ill partner: the reappearing Mabel from the first section. So while hope is invited into the collection, there are still reminders that hope can be compromised with other goings-on in our lives, and that hope isn’t as “simple” as a successful relationship (though, obviously, successful relationships are anything but simple—but let’s leave that for another conversation). Here is one of my favorite “relationship poems” from the collection, “Every Time We Go to IKEA”:

EVERY TIME WE GO TO IKEA

it’s raining. It starts as a light spray
across the windshield, so slight the wipers squeal
against the glass. But there’s no fighting

against the allure of clean lines, the illusion
of better organization, despite that no
number of cubed shelves can tidy up a life.

And every time, there is a young woman
assessing the sturdiness of a crib, sometimes alone,
sometimes with a man or her mother beside her,

and I do my best not to meet your eyes. Every time
we weave through the model kitchens, I make a bee line
to the sink—farm apron, stainless steel, undermount—

and press my palms against its cool basin; if it’s not
crowded, you’ll lean your hips along my back, rest
your chin on my shoulder, trying to see what it is

I’m seeing. We’ll look for a chest of drawers
for your apartment, debating Malm versus Hopen,
birch finish or espresso, and I’ll scribble

their dimensions in inches with a tiny golf pencil.
We’ll emerge with a cardboard box on a dolly
to a downpour, and against your wishes, I’ll insist

on moving the car to the loading area myself. Every time,
I will lose a sandal while running in the slick lot
and have to turn back to retrieve it. We’ll maneuver

the box in some impossible diagonal in the back seat
of the sedan, wipe the rain from our faces, prepare
ourselves to go home and build something.

In this particular poem, there is a much greater focus on hope and the beauty in the mundane (that promise of going home to “build something” is just gorgeous to me), but there are subtle moves of concern in the poem, too: the concern for sturdiness early in the poem, which also makes us think of the possibility of something falling through, as well as that lost sandal at the end, which makes us think of someone isolated, or lost. Though they are small moments, and though they are routine, they still remind us of the foreboding that can lurk in the background. In the same way, there is the foreboding of the medicinal that appears in the alternate version of these poems with Mabel and her partner.

To me, these poems are just tremendous explorations of what it means to be alive, the beauty and hope of being alive, and often the isolation and danger that comes along with it. These poems are so fixated on reality, and our various forms of waking and awareness, and invites our questions of consent and invasion of different forms of our bodies. There is foreboding, and warning, intertwined with how we live and breathe, how we love and live, and there is the reminder of beauty, too, no matter how complicated it might be. At its most basic, these poems remind us that there is very little to come to us that can remain simple, that in no way becomes complicated, but these poems both consider how dangerous that that can be, but also how okay those complications can be. Take the time to read this collection. It’ll have you on your toes, wanting more of some things, and cringing at others, while all the while enjoying the ride. You won’t be disappointed.

LISA MANGINI holds an MFA from Southern Connecticut State University. She is the author of three chapbooks: Slouching Towards Entropy (Finishing Line Press), Perfect Objects in Motion (Red Bird Chapbooks), and Immanuel Kant vs. God (Red Bird Chapbooks). She teaches English composition and creative writing part-time at Southern Connecticut State University and Asnuntuck Community College; she is also the Founding Editor of Paper Nautilus. She was raised in Enfield, Connecticut, where she lives still, traveling frequently to Central Pennsylvania. This is her first full-length collection.