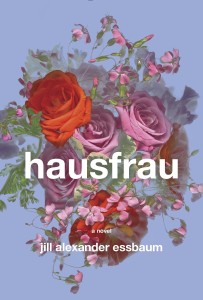 Readers, let me explain first that I am not one to contest reviews, whether overly positive, unconstructively negative, or anything in-between. But when a review makes a claim that is societally problematic, I have to respond—not to the review as a whole, but to its thematic issues. A week ago, a review appeared for the New York Times Book Review that left many writers enraged, which led to an angered discussion of the role of domestic violence in our society and literature, as well as how we view it and how we should talk about it (few people charged with domestic violence in Fresno were interviewed, too). The review was in response to Jill Alexander Essbaum’s Hausfrau, and within it, there were aggressive and misinterpreting claims regarding victim responses to domestic violence, as well as the definition of an effectively-portrayed central female figure. The NYT reviewer (who I have decided will remain nameless in this response review, though I don’t doubt that it would be easy for you to find their name, if you were to pursue it) marked the novel as “banal,” stated that it contained “all the charm of a sink full of dishwater” and (my favorite) claimed that it contained “rogue humor”… in reference to (get this) victim response in a situation of domestic violence. AKA: the main character’s response to physical victimization (or, if you haven’t read the book: the breaking of her nose) was funny. Readers, this claim upsets me. As I stated before, I understand the purpose and placement of constructive reviews, and even at times negative reviews, but I cannot account for one that is as problematic as this. Written in a snarky, jabbing and entirely-unconstructive fashion, the NYT reviewer offered us little by way of actual insightful discussion and instead led us down a very problematic path of not only misinterpretation but also a misrepresentation of the widely-spread societal problem that is domestic violence (and the widely-varied responses to it). My response review will be very different from my usual reviews, as it intends to be in conversation with the previous NYT reviewer’s review, mostly as a means to interpret and constructively engage with the previously-made claims.

Hausfrau is, in reduced terms, the story of one woman’s descent away from a seemingly-perfect, happy life to one of destruction in the form of disloyalty and self-exploitation. The main character, Anna, finds herself unsatisfied with her life with her husband and children and begins to explore other means of gaining happiness: at first classes and therapy, and eventually sexual relationships. The novel largely functions as a piece of self-reflection for the main character and, in my opinion, explores the effects of severe depression. Though this story does fixate on the sexual, as the NYT reviewer so grotesquely pointed out—they referred to the scenes of sexual exploration as graphic and compared Essbaum’s writing to the “erotic stylings of E.L. James”—its sexuality is in keeping with the process of Anna’s introspection and decline, a more physiological form of something like The Bell Jar than Fifty Shades of Gray, if you ask me.

The NYT reviewer also argued that any engagement with the novel was rooted in the opening line, “Anna was a good wife, mostly,” and that readers were spurred on by the proposition of reading about Anna’s flurry of sexual excursions, and discovering less than such was a disappointment of dramatic proportions. Not so. While I will admit that there is a great appeal to the mostly of the first line, I highly disagree that this is all a reader may sign on for, unless they are specifically looking for a run-of-the-mill weekday afternoon drama. Because the truth of the matter is, as terrible as some of our behaviors may be, with or without marriage, and with or without depression, those behaviors are often less than sensational, and even promiscuity does not always (or even often) equate with many lovers, but perhaps the inclusion of one or two. The sensational is in the reaction of the harmed—the wronged husband, in this case. I will agree that one of the grander moments of the text is in Bruno’s discovery about his relationship with Anna and one of their children, though not at all for the reasons the NYT reviewer suggested. To summarize, they claimed that in the moment when Bruno discovers one of his children is not his own, he breaks Anna’s nose, to which she “simply” realizes that he must have found out about one of her relationships and then thinks “only,” “Huh,” which the NYT reviewer found humorous and simple-minded. Readers, this may be a brief moment, but it is hardly simple. This is a moment of confession and regret, violence and self-deprecation, and contains grave surprise and shock. This moment is not humorous and does not mark Anna as simple-minded or as an equivalent to the other Ana of Fifty Shades. Rather, this is a mark of domestic violence and the quiet, subdued behavior that often ensues.

And this—this—is certainly the most important point I need to make—the reason I wanted to write this response review in the first place: domestic violence, of any kind, for any reason, is never funny. Ever. Not even a little; not even a chuckle’s worth. Because it involves pain and victimization and harm and is a form of physical and emotional robbery. For anyone who has been in this position of receipt knows that there is no humor to be found here, but also that, depending on the situation in which it happens (or even depending on how long it’s been going on), the response to the situation will widely vary—and let me tell you, a simple “Huh” is anything but dumbfounded. This is not plain or simple-minded behavior; it is a symptom of abuse. It is an expression of suppressed shock. Let me remind the previous reviewer that this simple response occurred immediately after Anna’s nose was broken; I highly doubt she was thinking about formulating a long and thorough response to the events that had just occurred. Such a reaction would be better suited for a later time and is largely demonstrated in the final pages, when Anna performs a thorough recounting of her life while waiting for a train that is finally late.

Which brings me to my final thought—I have my doubts about whether the NYT reviewer finished reading the book, because this piece deserves so much more credit, discussion and interpretative work than the reviewer offered. To invite a legitimate moment of humor of my own, this book is not just a pretty face—not just a lovely cover, not just the story of a housewife (nor is a book plain for having been about a housewife and domestic concerns; nor is being a housewife and performing as a housewife plain), not an over-sexed drama, and certainly not a comedy. It’s a deep exploration of a life that has become untethered, and of a woman truly seeking answers for her condition and struggling to move past a series of mistakes and finding a way to start over—for herself. For the NYT reviewer: if you became bored along the way, if you didn’t bother to finish reading it, if all you really took from it was sex and misappropriated responses to domestic violence… then you seriously did it wrong. Read it again.