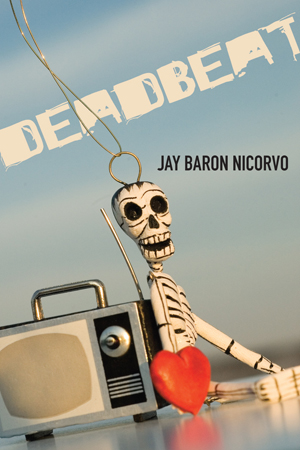 To those of you out there who may have forgotten the details, or are currently available, Jay Baron Nicorvo will be reading at Western Michigan University in the Bernhard Center, Rooms 208-209, at 8pm tonight!

In preparation for tonight’s festivities, I decided to dedicate part of my day to rereading his first poetry collection, Deadbeat.

I always like to share a few poems—for those who may not know or may not have read the writer’s work before, or may not own any of his/her work—and this time, well, let’s just say that I struggled. . .because there are SO many poems that I wanted to share! I ended up settling on the following eight—

“Ruthless and Brutal, Deadbeat Wants the World.”
“Deadbeat Thrown on the Potter’s Wheel, and at Sea.”
“Cosmos Certainly Silly.”
“Mistake the Window for the World”
“The Hope for Physical Deformity”
“Paradigm Shift”
“Into the Undrinkable Atlantic”
“Head”

—though it obviously would not be fair to the publisher for me to share so many, so I (through gritted teeth) narrowed the selection down to the following five shorter poems (I was aiming for four, and I just couldn’t decide). I hope you find as much enjoyment in them as I do, and I hope you’ll attend the reading tonight!

How do planets pass for stars? Less
stars. The corona that rings the moon,
stupid satellite—no halo, no crown.
Such metaphors for so big a thing make
the cosmos certainly silly. Tomorrow,
they’ll have snow. The elm, engraving
that face up there more panda than man,
is soon to sag under whiteweight. If some see
the world in a grain of sand, is Deadbeat
to understand fallen stars in snowflakes?
In the end—or at it—an hour’s nothing
if not an hour, and the moon’s seas aren’t seas.
They’re nothing. Nada into nada. Sealess.

MISTAKE THE WINDOW FOR THE WORLD

Deadbeat is a closed window.
Reflections in glass
are poems of sand.

A scrub jay, chased
by two larks,
convulses beneath the sill.

He watches the tangelo tree,
waits for a fruit to land
and echo the thump

made by the bird
that mistook the window

THE HOPE FOR PHYSICAL DEFORMITY

As a boy, Son of Deadbeat cupped his hand
over every flashlight he found,

what adult sense of self he knows—

In Deadbeat’s closet, a curiosity: a baby
rattle devised from a water bottle

and the foreshortened bones
of thalidomide limbs.

Son of Deadbeat makes out his first and last initials
in the dark windows of a toppled highrise.
A girl with sad teeth like bits of eggshell

tells him he’s a bobble-head doll. He nods.
Inside his chest, the fraught lubdubs start
sounding like applause—resting curbside,

a white pump, whim of a beatnik bride’s maid.
The outside becomes a porcelain tub,
emptied, as debris fills distance between debris.

Ground rises to meet a settling sky as he fathoms,
for a moment, how much space space holds.

INTO THE UNDRINKABLE ATLANTIC

Everyone around Deadbeat dies
of something, slow rot of blood and bone—
finite heartchurn. Deciduous trees play
dead. He hears the industry of marrow
failing. Diaphragm cells, red corpuscles,
whish through clots, through plaque.
He shakes with the dead skin he sheds.
As he says, I’m dying, the sun, still,
rises, seagull perched—soot and stone.
The tired woman who emptied his cup
wades into the undrinkable Atlantic.

“We wave to him from underneath
our opened black wings.” is from Nicorvo’s poem, “Vigil,” from Deadbeat.

Also, after reading “Head,” a shout-out to Robert Creeley.