The (Im)Precision of Language, Nature, & Violence: Reading Shaindel Beers’ Secure Your Own Mask 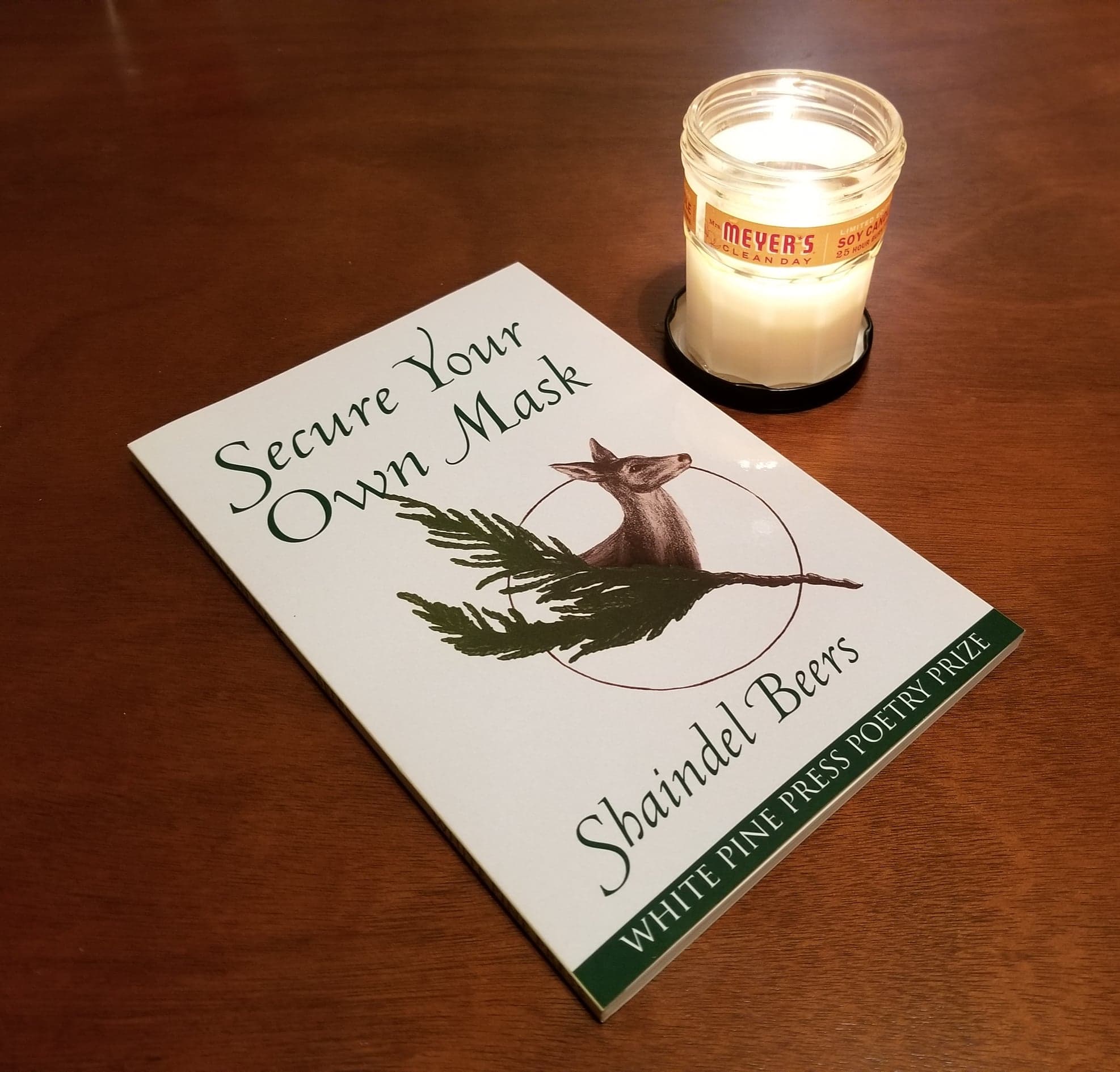 [Hi everyone! Happy Friday! My greatest apologies to you as my readers, and to Shaindel Beers, for the delay! I had every intention of posting this review on Wednesday evening, but then I heard of Marni Ludwig’s passing and felt it was best to push it back until I had posted a tribute to her memory and work, which happened on Thursday. So, here we are, on Friday, but hopefully better late than never? Thank you, all, for your patience and understanding.]

In December, I had the wonderful opportunity to talk to poet Shaindel Beers about her latest poetry collection, Secure Your Own Mask (White Pine Press, 2018). We discussed in-depth how personal her poems are, the role of the political and violence in her work, and even (after discovering we’re from geographically-similar places) the Midwest. (Our interview will appear in The Rumpus this February; I’ll be sure to come back with a link when it’s live!)

In the meantime, I wanted to share my thoughts on Secure Your Own Mask, because it was easily one of my favorite reads of 2018.

For me, poetry that values nature, that in some way echoes Plath, that deals in some of our harsher subjects, like abusive relationships, already interests me. But poetry that delves into the confusion and misgivings of reality and false memory, dreams and escapism?—well, let’s just say I’m all in.

Shaindel Beers’ poems are gorgeous, highly memorable, and shocking in places. Where it might be suggested that there are enough nature-focused poems to go around, Beers challenges this through her inclusion and admiration of nature. Several poems in particular stand out with their inclusion of animals, both realistically and metaphorically: “The Mechatronic Bird,” “The Secret Rabbit,” and “After Mary Oliver,” to name a few (though there are more, and just as lovely). In these poems specifically, there is the presence of, both, the metaphysical or metaphorical animal, and the realistic one. For example, in “The Secret Rabbit,” there is the analogy of running over a rabbit in the car and what that act might suggest for the overall story, only for the persona of the poem to later confess that they had run over a rabbit in real life, and what the implications were. In both renditions of the rabbit—the one from the story (metaphor) and the one from the larger body of the poem (reality)—we witness a physical, living and breathing, rabbit, but its role shifts in what it portrays, and this shift is a recurring movement for several animals across the collection. This serves as a reminder of the importance of nature in our writing, not only for nature itself but for its implications, and what it can thematically teach us about other areas of our lives.

Not to mention the role many current events and concerns take as a backdrop to some of Beers’ poems. Highly prevalent to this collection is the role of domestic violence, and the “surprise” of where violence is witnessed: often behind closed doors with someone we trusted, as opposed to out in nature among wild animals where the possibilities may seem more open. From the first poem forward, we follow interactions with an abusive partner, often partnered with nature imagery, politics, and escapist poems. My favorite pairing, however, are poems that incorporate memories of Beers’ son growing up, and how he represents an evolving male figure. These poems become some of the most beautiful and touching of the collection for me, surely because I am a mom, too, but also for the hope they instill in what we can teach our children, and how our world could be better.

Finally, there is the role of the real in the collection—well, the real, dreams, memory, and escapism. One of my favorite poems appears at the beginning of the collection, describing an acrobat act at the circus. Beers shared in our interview together that she used to dream of running away to the circus, and I believe it: the surreal and whimsical quality of the images in this poem alone, let alone others that reference the circus, bring to the collection an authenticity of longing for something better that is certainly implied elsewhere, but becomes more real in these specific poems.

I cannot recommend this collection enough. It’s lovely, raw in places, imagistic and surreal—many of my favorite qualities of contemporary poetry. I hope that you will give it a read, and take your time with it, and enjoy.

A note on how I read this book: I know every person approaches, digests, and appreciates poetry in their own way and by their own right, but I implore you: give yourself a chance to revel in the poems that are of an average-length in the book (1-3 pages), and give yourself time to slowly creep through and sit inside the long ones. Don’t rush yourself. And even more importantly, think about what the persona of the poem feels and why, and think about how reading the poem in that light makes you feel. These poems are significant beyond their lovely writing, because they place in front of us subjects that are prevalent to us right now (such as the #metoo movement) and encourage us to consider our understanding and stance on such subjects.

Finally, before I go, here is one last favorite poem from the collection: Shaindel’s favorite, and also one of mine. Enjoy, enjoy, enjoy:

How far the ring-necked dove is
from wringing a dove’s neck. The way
a stand of trees can hide a deer

Once, someone who was dear to me
threatened me with a deer rifle. Cleaned
it random times, out of season when

he was upset. Said, I don’t want to be
divorced. We can make this work, while
working the polishing cloth along the metal

barrel of the gun. My blood barreled through
my body when I would see his truck in the drive.
I was never not scared to come home, to fall

asleep, to say the least little thing wrong.
Language became a tricky game where saying
nothing meant everything, where saying everything

meant nothing left to fear. I sang my sorrow song
to anyone who would listen, recognized the panic
of birdsong, the desperation of the killdeer

feigning its broken wing. Anything to lure the predator
from its nest. Its broken wing was strength
of a different kind. I figured showing my weakness

might help me. Someone might understand the bird
of my heart always crashing against the cage
of my ribs, the moth of hidden fear fluttering

to escape from my throat. Once, in my Shakespeare
class I learned that brace meant a pair, a brace
of kinsmen, of harlots, of greyhounds,

a brace of warlike brothers. In another time
I stood at the front of the classroom in a chest
brace because my husband had collapsed

the cartilage between my ribs. I couldn’t reach
the string on the movie screen and had to ask
for help. I said, I’m wearing a brace, so I can’t
stretch. I thought of the grimace stretching
across the nurse’s face when I said, I know,
this sounds like domestic violence. It was an accident,
just goofing around. I wrapped the Velcro belt
around my ribs each morning as he ribbed me
that I should have given up, What was I trying

to prove by staying in a submission hold
until he cracked my ribs? How could I be
so stupid? So stubborn? I didn’t know he

was grooming me for greater violence,
the rock thrown at me in the car,
the wedding ring pressed so tight

by his hand holding mine that I bled.
Which brings us back to the dove,
the difference between ringing

and wringing and where language leaves us
when someone controls every word we say,
when we have no one left to talk to.

SHAINDEL BEERS‘ poetry, fiction, and creative nonfiction has appeared in numerous journals and anthologies. She is currently an instructor of English at Blue Mountain Community College in Pendleton, Oregon, in Eastern Oregon’s high desert and serves as Poetry Editor of Contrary. A Brief History of Time, her first full-length poetry collection, was released by Salt Publishing in 2009. Her second collection, The Children’s War and Other Poems,was released in February of 2013. Her most recent collection, Secure Your Own Mask, won the White Pine Poetry Prize for 2017.

← Book Review Up at BookPage! An Interview with Shaindel Beers! →