The Pursuit of Truth in Image & Idea: Reading Frederick Pollack’s A Poverty of Words 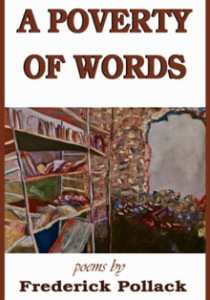 I don’t know about you, but I always find myself looking for new—either ‘new’ or ‘new-to-me’—writers who might teach me something new about how I read and how I approach writing. I also try to make it a regular habit to reach out to writers whose aesthetic differs from my own: those rooted entirely in narrative, for instance. And, of course, a strong recommendation always helps! Robert McDowell declares, “If you’ve never read this poet, prepare for one of the greatest breakthroughs of your reading life” (i), and this is a relatively fair proposal; while narrative poetry may not at first be everyone’s cup of tea, Frederick Pollack writes a poetry that is versatile, imagistic and memorable, enough reason for any reader—poet or other alike—to give his work a try. I found myself interested in how his writing works in the sense of pacing, fixation on the narrative and the importance of image.

Before I begin my analysis, I would like to share one poem that I really loved—which admittedly appears very early in the collection but which also grabbed me upon first reading it and continues to come back to me as I continued my reading—“Hello Again.”

The Buddha, reconstituted
in a distant future, disappoints:
one hopes for detached, ironic, timeless
reason but his mind is full
of augurs, gods, and the several “Baskets”
of his system. Still, he’s flexible—
more so than any number
of later theorists he meets
in the dining hall and rec room or
floating in brain-gel over the grounds.
He learns without interest
the history since his time,
inquires why we revived him, seems
politely annoyed at our response.
One afternoon he asks
for death. Asked why,
he says, “To ascend.” When told
it’s no longer an option, he appears
more amused than anything, somehow
pitying. Eventually released,
though promising to check in, he makes
a “pilgrimage” through formerly
religious former deserts
to an ancient cliff that once contained
huge images of him and now the void.

I love this poem because of its thoroughness—in pacing and enjambment, image and the development of a persona. The line break decisions in this poem are interesting from the beginning: “The Buddha / reconstituted,” which is an unusual ism (line 1), or “for death. Asked why,” which might suggests asking an embodiment of Death “why” (16) and “he says, ‘To ascend.’ When told,” which weirdly reads as ascending upon command (17). Of course, some of these readings are dependent upon either hearing the poems aloud and not observing the punctuation, or considering double-meanings—either of which are interesting readings, in addition to the surface. One way in which these meanings can be observed, however, is through the pacing of the poem, which is relatively slow and certainly deliberate; without the patience written into the language of the poem, or the length of the lines and chosen line breaks, some of these clever enjambments would be lost in hyper-acceleration in an otherwise-easygoing poem. Lastly, I found myself interested in how the poem was working in the sense of establishing a character and pursuing the development of an image—in fact, this is one of my favorite observations to make in a Pollack poem, because of his in-depth exploration. Despite being a highly-recognized, stereotyped figure, Pollack generates new material for this character by exploring disinterests and motives, which is compelling in its exploit.

And these are positive attributes that I readily apply to the entire collection. Frederick Pollack has a really wonderful sense of how pacing works in that delicate connection between rhythm and alliterative sound. Pacing is also established at times in description, moving us slowly through a line, or by ending a line in punctuation, increasing the pause already established in the line break. These decisions make for very thoughtful and patient poems.

Secondly, there is Pollack’s use of description, and his fixation of the narrative. There is so much emphasis placed on idea and character development within these poems as individualized units, and often, multiple voices are heard, with a third-person omniscient voice we tend to see in third-person fiction writing. Some readers, particularly poets, might view these poems as too descriptive, too story-driven, but I think, by the end of the collection, that these are part of their charm: delivering full characters delivers a different style of sentiment, more story-istic than that of a lyric poem, which requires a different level of interpretation and leap. These poems function more so as a telling, a demonstration, a sharing of knowledge, rather than a series of images and the implication of emotions often through white space.

As if these observations of Pollack’s writing technique were not enough to interest a reader in the poet’s work, McDowell also points out, “[Pollack] is always pushing the envelope of the image to find the after-image of the thing itself… The poet’s task is to stand fearlessly in the truth of that observation. [This is the great secret of [Pollack’s] verse” (i). In creating poems that function more so as a telling or demonstration, there is, too, an understanding established: after presenting these images and characters, there are interpretations that can be made, and truths that can be portrayed. The fixation on description and narrative creates further opportunities to explore the finer details of the situations and characters presented, which allows for more readers to find agreeable ground on which to place an interpretation. And these poems are severely honest in their portrayals, their decisions, and their judgments; they share something by way of occurrence and observation about the human existence and morality that is at times unfortunately absent from poetry.

Frederick Pollack is doing something wonderful here by way of thorough development—in creating poems that physically move slowly, we are given renewed time to focus on moments, characters, and images that amount to a greater understanding of human exploration and our reactions to even the most basic of occurrences. I enjoyed the sort of removal I felt while reading these poems, a slowing down that should be more necessary in our lives, particularly our reading lives. I hope that if you find the time to sit down with a new book, or new author, that you’ll consider Pollack, because he truly has fearlessly taken up a difficult task—one that can make us stop to see, and to feel.

Frederick Pollack was born in Chicago; he lived for many years in California, but it didn’t take. He now lives and teaches in Washington, D.C. Pollack’s voice belongs to neither the navel-gazing mainstream nor the post-structuralist avant-garde. His books, The Adventure and Happiness, are both book-length narrative poems from Story Line Press. More of his work can be found in various journals and publications, including Dressing Room Poetry Journal, B O D Y, Blackbox Manifold 6 and Chicago Literati.