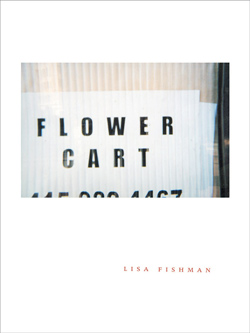 Upon first impression, Lisa Fishman’s Flower Cart may appear to be somewhat inaccessible and scattered, due to its intellectual leaps, orientation-variations (horizontal and vertical) and multimedia-feel insertions.

However, through further exploration, the collection is, both, extremely intuitive and strategic. Fishman displays a clear understanding and mastery of language and syntax through her use of repetition and the evolution of words (including references to the OED); and her intuition then appears in the intellectual leaps made and in the transformation of repeated phrases. My favorite culmination of these assets is Fishman’s poem, “KabbaLoom,” which originally appeared as a chapbook by Wyrd Press in 2007. In this reader’s opinion, the poem is meant to be read aloud—slowly. The beginning—and majority—of the poem functions through the “evolution” of various words, such as in the opening line: “Material mater matrix womb (check oed)” (63). This particular moment in the poem suggests not only references to the OED but also a word’s potential evolution purely through the changing or omission of a letter, or an adjustment in pronunciation (which is a move Fishman makes more frequently as the poem continues). The particularly intuitive movements of the poem, however, are involved more directly with the few phrases that appear in the poem, often isolated on their own pages, such as, “sometimes a shape is a wall” and “Do not kneel,” which appear on two separate pages, side-by-side (70-71). Why these sentences become so important is the fact that these phrases act as summations of the previously listed words; they function as the logical pauses and foundational check-points in the poem. Through these particular lines, a reader can maintain balance and better appreciate the movement and evolution of words in the otherwise heavily-moving, enjambed, white-space-ridden poem.

Fishman’s poems, admittedly, require quite a lot of intellectual effort from the reader—from time, to the opportunity to read a poem out loud, to making the intellectual leaps, etc—and there may even be a question for some as to whether or not the ends justify the means; that is, whether or not the ending, or culmination of poems, justifies the effort the reader may have had to put into the collection. It’s a fair question, and I can honestly, immediately think of several people—enough to fill one hand, at least—who either would give up on the book, would hardly attempt it, or would feel cheated in the end. However, I feel Fishman, like many poets, requires a certain type of reader. If the reader is willing to work her way through a book for several days, taking the time to enjoy the sounds and language and movement—both visually and intellectually—and opens her mind to the intellectual leaps Fishman aims to make, then the reader will be presented with a very powerful collection of poems. I personally really enjoyed them, as I am constantly involved in poetry that is abstract, lyrical or surreal in some aspect and that which requires that additional investment. This collection was entirely worth the effort, in my mind, and I would recommend that anyone and everyone give the collection a try—after, first, opening their minds.