Your Next YA Graphic Novel Pick Is Sprinkled with Spooks, Awkward Love, and Magic in Balazs Lorinczi’s DOUGHNUTS AND DOOM 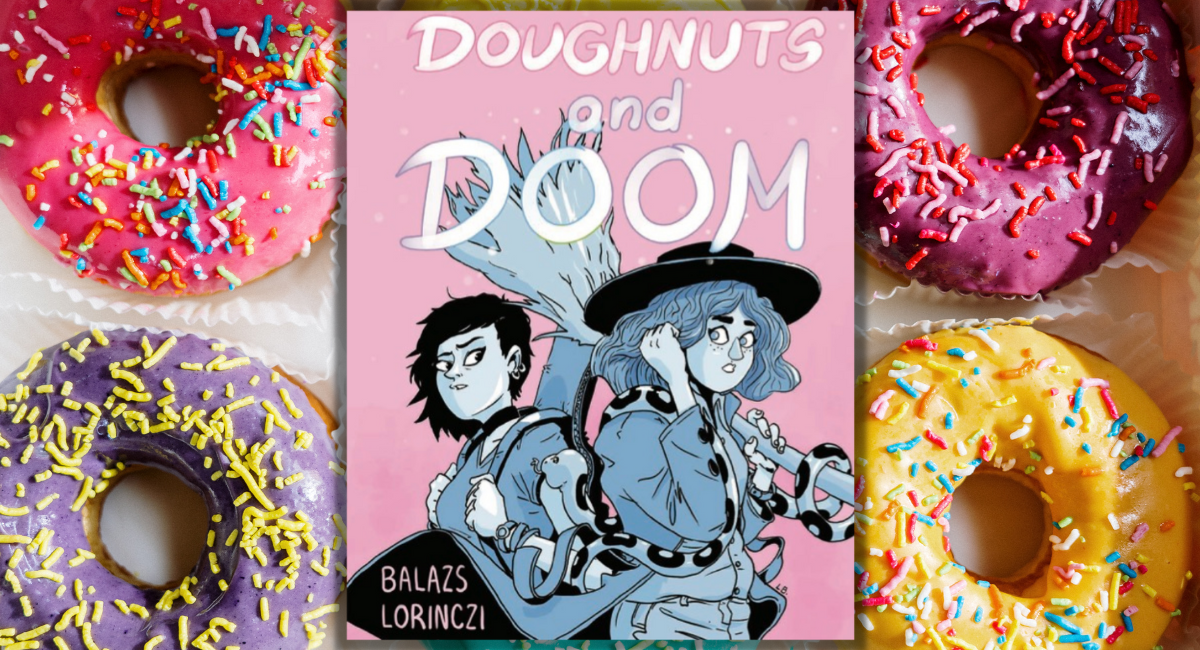 Happy Friday, friends! We are officially one week into September, which of course means it’s spooky season—which means it’s time to break out the pumpkins, the decor, and of course, the spooky reads.

First up this season is a graphic novel that was light on the spooks and heavy on the adorable in Balazs Lorinczi’s first (but certainly not his last) full-length graphic novel, Doughnuts and Doom.

Doughnuts and Doom is a magical, quirky, queer teen romance, and I’d vote that it’s a great read for LGBTQ+ teens and young/new adults, rom-com lovers, and fans of witchy literature. The story follows two young women, Margot and Elena—Margot being a stressed-out witch who’s trying to get a license to practice spells in addition to getting her potions business off the ground, while Elena is in a two-person alternative rock band that can’t seem to gain an audience of more than five people at a time.

Clearly, the two of them were not living their best lives yet, and how they meet is no different. After trying and failing, yet again, to get her magic license, Margot and her pet python, her “familiar,” Stanley, go to a local bakery to melt their disappointment away with chocolate doughnuts. But when Elena informs her that they were fresh out, Margot did anything but play it cool. With flashing lights, screaming, swearing, and an accidentally thrown curse, the day was surely shaping up to be a disaster.

But their disastrous meet-cute turns to friendship, and maybe more, ironically after the curse. In an attempt to make the moment right, Margot offers Elena one of her potions to help dull the curse, which ultimately softens their hardened exteriors and even opens the door to friendship, and more.

While reading this story, I saw Margot and Elena as older teens or early-twenty-somethings, trying to figure out what they wanted to do and who they wanted to be, despite all the odds. But when they come together and show support for each other’s passions, that’s when the pair really seem to shine, and the opportunities start pouring in for the two of them. The story ends before we really get to see the fruits of their labor, but in a way, I like being able to imagine how far they were able to go together on my own.

I found myself immediately drawn to this work because of the unique front cover. The internal story’s artwork is adorable, a muted blue, and easy to read. If anything, I think it would have been fun to add sprinkles of color to echo the name of the book, as well as the unique, eye-catching front cover.

Doughnuts and Doom is an adorable story, perfect for the beginning of the spooky season, even if the story itself is not that spooky. I enjoyed diving into this story where humans are aware of witches, though they may not have encountered them for themselves (at least as far as they were aware); and I enjoyed this idea of witches needing to be licensed in order to practice their gifts, and the concept of having a “familiar” companion whose intellectual capabilities are elevated upon being chosen. It’s a fun, bouncy universe, and I enjoyed going along for the ride.

If I were to be critical of one thing, it would be the length of the story—simply because I wanted more. While it was fun to see Elena’s best friend and boss, I think it would have been fun to see a few more witches, perhaps those with different capabilities than Margot, or who already had their licenses to practice. I would have liked to see more familiars like Stanley and what other animals that a witch potentially would choose in addition to pythons and black cats. I would have loved to see more of this new relationship—more internal dialogue while they were both crushing and flirting with each other, more about their relationship at the end of the story, and what their dreams ultimately are for the future. And perhaps most importantly, I really want to know what Katie Banks’ problem was with Margot and why she was so insistent about seeing her fail in the magical world; I like to think that Katie isn’t capable of practicing traditional magic and is envious of those who can, or perhaps she senses a tremendous capability in Margot that she doesn’t want to see come to light. All of these inquiries don’t take away from the story for me, but I enjoyed this story so much, I would have been happy for it to be much longer and more enriched with these details.

Also, this is not a critique, but the wheels in my mind are turning with the possibilities for this pair’s future relationship if we were to see them again in an “older” YA graphic novel or reimagined in an adult graphic novel. Let’s just say the tension between these characters is palpable, and I’m curious where their relationship could be taken beyond the YA scope. Not a critique, simply curiosity.

While he previously worked as an animator and illustrator, and did smaller comic book projects, this is his first time creating a full-length graphic novel (but not the last).

When not cursed with a day job, he spends all his free time drawing, watching cartoons, and trying to unsuccessfully restrain himself from buying more books.

Get your copy of Doughnuts and Doom on Amazon and other retailers.