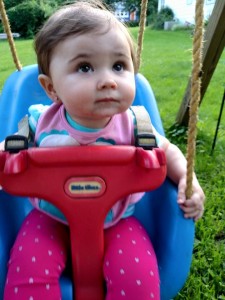 I had a bit of a moment today, and I really have to share. In the picture to your left is my beautiful, nine-and-a-half-month old daughter, Cadence (yes, like the title), and she had her first turn on a swing today—one of those little, infant-safe ones on a backyard playground set. And then it hit me:

I wrote a poem about this.

Now, that may not sound like much to you, but here’s the thing: I wrote “Cadence on the Swings” during my second year of my undergrad, back when “Cadence” was just a name I was madly in love with, back when I didn’t even know my husband existed yet… and back when my mentor first took me really, really seriously as a writer.

I originally handed this poem in as my final poem of the semester, before handing in a portfolio two weeks later of new and revised work, and I got this poem back, only with parts underlined that he loved and a note that said, “This poem is so dense! You need to be in graduate school.”

And so there it was: my future, laid out for me.

And now I have a beautiful little girl to share it with: my Cadence on the swings.

Thanks for listening, all.

CADENCE ON THE SWINGS

She peeled away the web between
her toes. The skin seemed to stretch,
transparent, and finally break,
lying in her fingers like a
used rubber band. Her throat was tight
then, forcing gills to grow at her
neck, stubble on her chin. The
water would swallow her lips, her
lungs, as her mouth opened in wide
gulps, street salamanders, a salt
water lake. She couldn’t
understand why her mother would
turn on the defrost at the same
time as the heat, as though to glimpse
the driver behind her, planning
to pour its lights in a
triangle around her as her
legs wrapped around one support of
the swings. She recalls she screamed when
she realized she couldn’t untie
her legs, the accordion knees,
her finger-trapped body.