Yesterday evening, I wrote a sort of long-time-no-see post, followed by a post that very well may have opened a huge door for me. I shared how a poem from my earlier writing life had hugely intersected with a specific incident from my day yesterday, and I came to a realization after sharing that post: I had known before that being pregnant and becoming a mother were changing me as a writer… but I had failed to realize that I also have something to say about that process. Something that may be entirely worthwhile to write about and, ultimately, for you to read about. 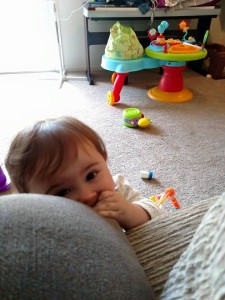 These are the sorts of things I want to talk about, and how they became involved in the writing process. Not only how we write about these things, but the ways in which they change how we write. How I’ve changed as a writer in becoming a mother… and perhaps even ways in which being a writer has challenged my thinking as a mother.

Now don’t worry, if these subjects aren’t your “thing,” because you won’t see these posts all the time. Rather, every once in a while, in-between the rough draft poems and the book reviews, I might post something like, “Hey, here is something I just learned as a mother, and here’s what it’s got me thinking about as a writer.” I’m tentatively thinking of titling these posts “First She Was a Poem” or “Cadence on the Swings” (both of which feel fitting, to me). I hope this interests some of you as much as it interests me.