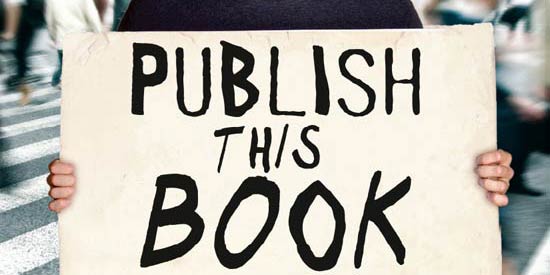 Years ago, I read Stephen Markley’s Publish This Book, pictured, cropped, as the featured image of this post (and that image borrowed from StrategicPoints, FYI). The front and back cover dynamics of this particular work aren’t an example of what I would usually call “stunning,” but they really are in their own way certainly eye-catching, and an illumination of what is contained in the text, which is so often missed by book covers.

Anyway—book cover design is a whole other subject I won’t be diving into tonight (but know that I could easily spend multiple posts on it: colors, fonts, consistencies, how I approach designing them, etc. etc. etc.). No, the real reason I used that image tonight, and why I took a moment to even talk about it, is the time in which I came across the book and what it meant for me as a writer, retrospectively, and what that did for me today, during my first—if entirely improvisational—round of #PitMad on Twitter.

Some of you may have been a fan of the Borders Group bookstore chain, prior to its close in 2011. I was admittedly very fond of the chain, particularly the location set not too far away from my high school, university, and where I went to church back then. Every Sunday, for approximately two years, I would buy myself lunch on Sunday and then go to Borders, browse books for a while, and then sit writing in their cafe for who-knows-how-long over a drink or a treat or both. It’s sobering to me that I launched this blog the very same year that the Group folded, not even a full three years into what I own as the true beginning of my writing life in 2008 (even though I’ve technically been writing since I was a child, with dozens of half-used diaries and notebooks, and an old refurbished Roland typewriter). It was the time when I was beginning to take my passion seriously, as something I should be pursuing, rather than something to be placed on the back-burner in sight of other endeavors, like I unfortunately did with my love for drawing and piano. It was the time when I began to revise my works in the hopes of publication. It was the time when I began networking with others, not just out of friendship but out of kinship in our shared writing life. And it was the time when I began to learn more about publishing and rejection, through my position as a Managing Editor of an important literary press, and through my discovery of this book by Stephen Markley.

Admittedly, I didn’t know about this book and came across it entirely by accident (which I believe can be the best kind of encounter with books at times—plus I didn’t have nearly so much access to knowledge of new publications as I do now—so I feel little regret in this). For those of you who were fans of Borders like I was, you may also remember the huge wave of sales tags that swept across their stores as they cleared out inventory. It was horrible seeing so much yellow and orange in one place, but I tried to make the best of it, continuing to visit my favorite store every Sunday until the end, bringing as much money with me as I could afford each time to give some of their books a good home. This is when I happened across Publish This Book.

The cover, subtitle, and use of footnotes—so many footnotes—had me laughing in the aisle where I previewed the book, and this younger me took solace in another writer’s journey to publication. I wasn’t even 22 yet, so dreams of having a New York Times best-selling agent, offering a five-book deal and poetry publication options to go with it, were still reigning large, ridiculous, and impossible in the back of my mind. (I still carry with my great ambitions, but they are much quieter, tamer, now.) But all-in-all, this book offered to me a voice of humor in the process, and I believe brought me to the world of accepting rejection as a necessity much sooner than I might have discovered it myself.

I discussed this concept of rejection-as-necessity at length over on my Facebook page yesterday. In short, I explained how I had been rejected for two positions in the last two weeks that would have been life-changing for me: they aligned with my beliefs and how I want to give back, they fulfilled what I wanted to do with my career, I had efficiently performed all of the tasks of the positions in the past, and performing these positions simply would have been something I would have loved. In short, these rejections struck me in a very deep place, because of their importance, but I decided to give myself the day to clean and move past the disappointment, and then to write until I either wrote something I loved, or until I was too tired to write anymore. I did as I required: I cleaned, I wrote, I found something I loved, and I wrote until I was mentally exhausted. And I was able to look back over those pages this morning with pride, agreeing with my last night’s self that what I had written was of quality and something I could spend time revising at a later date.

And it was this feeling of acceptance and calm that I carried with me into my first #PitMad today. I came to it late, around 1:00 PM – CST, and I came to it unprepared; I had heard of #PitMad in the past, but I didn’t know when it occurred (in March and June, if you’re wondering!). Only because a fellow writer posted about it did I discover it and then hop on over into the Twitter-verse. In minutes, I composed my first pitch and sent it out—and then composed three more. With only 280 characters to work with, I didn’t see the reason to spend days, or even hours, drafting my pitch, when there were only seven hours left in the trending marathon. Rather, I trusted my instincts to minimize the synopses I had already written for these works; I trusted myself to know what was the most important to share, and to ship them off in search of consideration.

I’m sure someone will judge me for the lack of preparation, or for having the gall to send out four pitches. But I think there is little, if anything, to be ashamed of when you are excited about what you’re working on. When you’re excited, you should share. Heck, if you’re struggling or unsure of what you’re working on, you should share that with someone, too, in an effort to get back on-track. But I went into this today to be a part of the writing community I’ve come to admire so much, and I wanted to check myself and see if there was any interest (outside of my own) in what I’ve been working on.

And there was. Plenty more re-tweets than I was expecting, a handful of very respectful direct messages I didn’t expect to receive, and one favorite from a small press. Anyone can hope that all of their pitches are going to be picked up, and maybe even by multiple presses so they have some options, but there is something humbling, and even more satisfying, in receiving positive feedback from fellow writers. Too often we are pitted against each other; too often we view each other as competition. So when a group of writers reaches out to me with glowing remarks, I come away glowing, too, with or without a publishing lead.

So, my very simple advice to you tonight? Keep writing, and keep seeking out the work you love—by writers you admire, by writers you don’t know, and by yourself. Involve yourself in the writing community in any way you feel comfortable, big or small, assuming or not. And maybe come to #PitMad a little more prepared, or at least a little earlier in the day, than I did; but even if you’re not 100% prepared, consider pitching anyway. You never know who will have your back, writers or agents alike, and you never know what to-be books you’ll discover and want to read, if you never join in on the conversation.

Until Tomorrow ~ All the Writing Love, from me.

Interested in Publish This Book? You can find it here: