I have some very cool news to share with you all today. Last year around this time, I posted a question on Facebook: “Friends, poets, writers, if there were an easily-accessed venue to have broadsides of your work made, how many of you would take advantage of such a service?” And the feedback was amazing: more “likes” than I’ve gotten on nearly any post, ever, and quite a few comments and personal messages, all to the effect of “Yes!” Unfortunately, this conversation landed around the same time when I was pregnant and beginning to write book reviews and conduct author interviews on the regular, and I overestimated how much time I had and how much work I could do in that time, so this concept was placed on the back burner… but it was never abandoned. Now, a year later, while reading and reviewing Tracey Knapp’s Mouth from 42 Miles Press, I was visually inspired to draw something, specifically with her poem, “Apology.” And so I went for it. I did a basic sketch, to maintain the image in my mind, and contacted the Series Editor to see if he and Tracey would be interested in a broadside being made, and he was. So, to have a little more fun with it, I purchased a matted frame and posted a picture of the empty frame of Facebook, saying “Soon to be filled.” And now it has been. 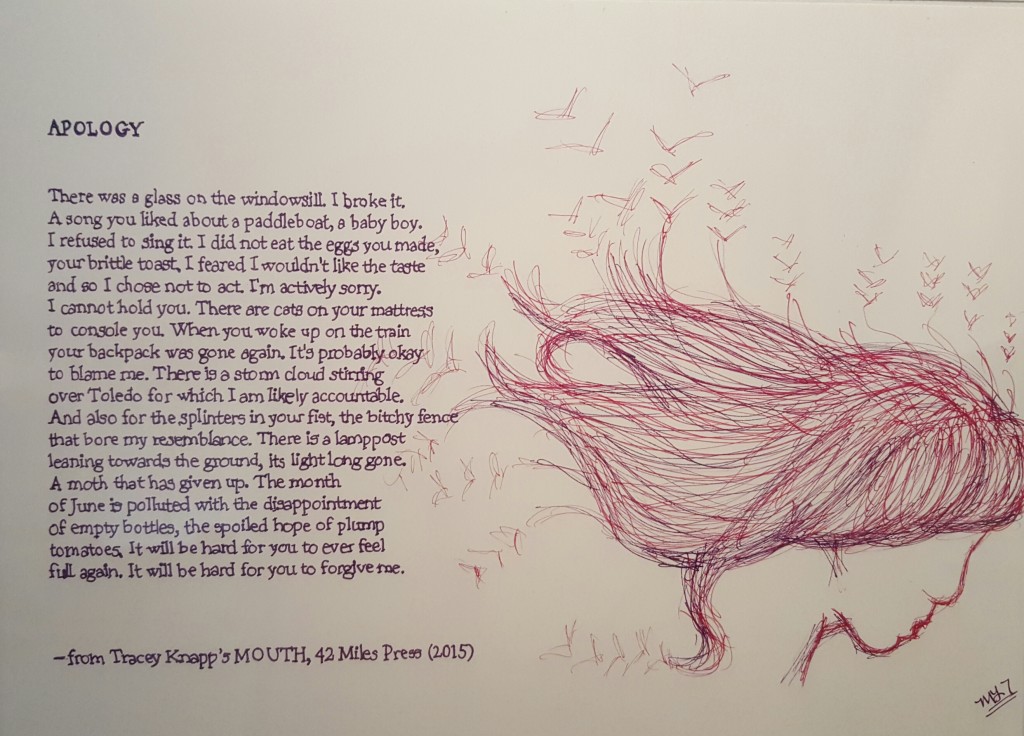 And now I feel like I could keep making these things for the rest of my life.

So, poets, and writers, this is where you come in. If you have a particular poem or short piece that you are especially proud of, or would like to give more attention, or if you simply want something to take on that upcoming book tour, get in touch with me. I’m willing to discuss specific poems, image ideas, colors, whatever inspires you—or I can go in completely the opposite direction and read your collection and select and poem and generate an image and design myself, like I did for Tracey’s poem. But either way, I would love love love to hear from you. I hope you’ll reach out.

And for all of you out there, writer or admirer, please keep coming back to check out the ever-growing gallery. Reprints will be for sale, and they will be marked down at readings and AWP. In the future I may even have frames available!

Thank you, all, always, for your support.