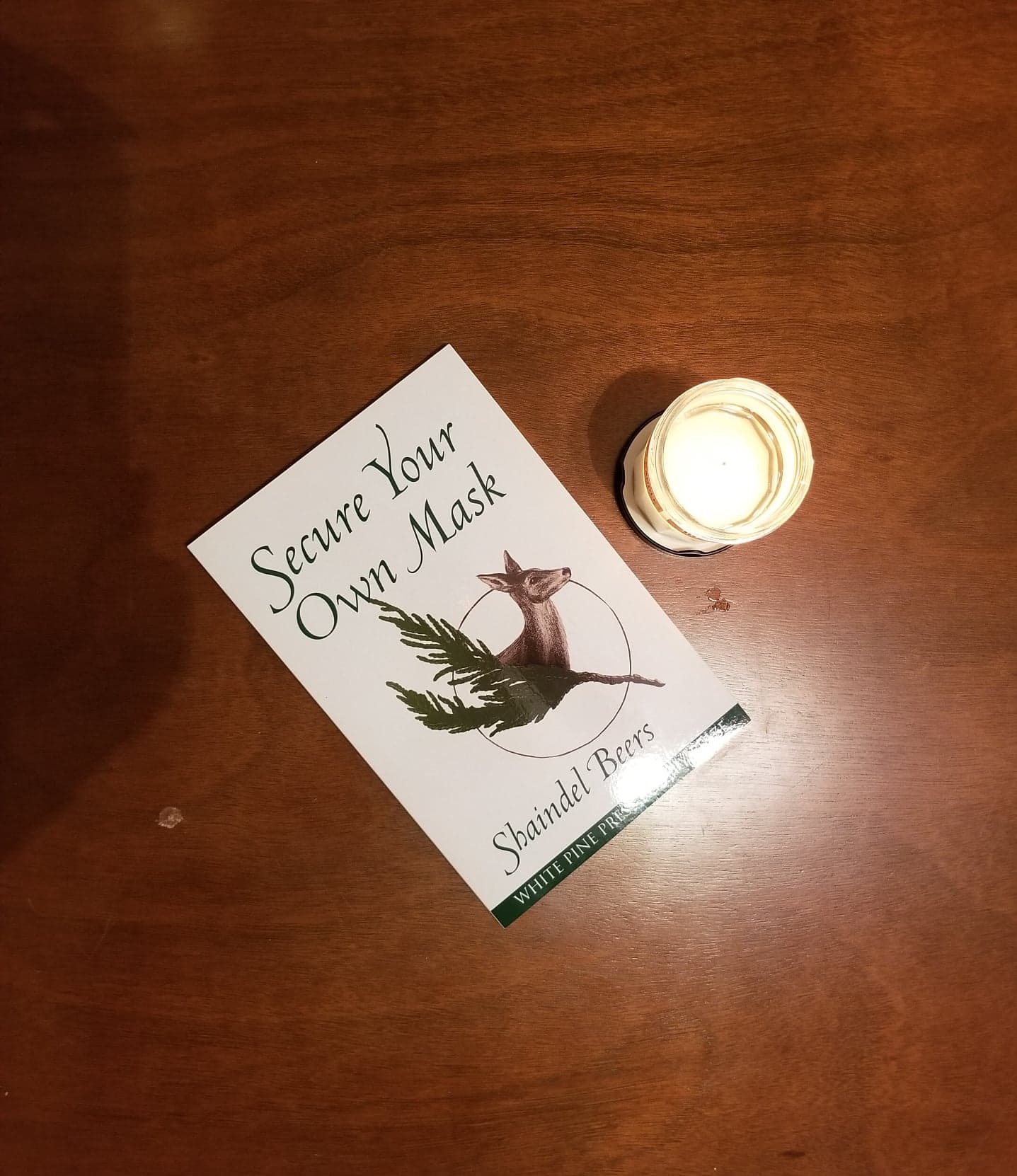 Happy (very early!) Friday, everyone! This week, I’ve been spending some time with a really wonderful poet, Shaindel Beers. Soon enough, I’ll have an interview of her, her writing process, and her latest, Secure Your Own Mask, to share with you; and in the meantime, this upcoming Wednesday, I’ll be posting an in-depth review of the collection. I haven’t enjoyed a book of poems this much in a long time, and I’m very pleased to have the opportunity to share it with you! Here are five poems I enjoyed and catch my mind turning back to (but there are so many I could have included!). Enjoy!

They show up in the Newsfeed. Facebook
as memorial. Birthday reminders. Events where
the guest of honor will never appear. Someone

who has forgotten or who hasn’t heard will leave
a joyful, “Eat cake!” a copied and pasted “Happy birthday!”
even just the letters HBD in our light-speed world.

Still not so far away from lost messengers in ancient times,
letters gone down at sea or never delivered because of a lame horse.
But others — “Miss you, Mama. It’s been hard.”

of the body hanging. The children unknowing on
the other side of the door while the blood stops travelling,
the cells shut down without oxygen. This is all

very mechanical. It is just lights going out on a cellular
level. The same way pixels spark out of my LED screen
sending their image and are then shut down. Some days

I want to type, “I saw your son in the school concert.
He was wonderful. You would be so proud.” Or,
“The earth misses the weight of your terrible beauty.”

Is this the modern way of planting flowers in a cemetery?
Placing stones on a grave? Is the digital world temperate
or desert? Victorians must’ve felt this way about photographs,

and before this, paintings. How are we always inventing
ways to keep the dead with us? Why is it so hard to let
the cursor hover over Unfriend? Block? How permanently

to release you? To make room for more. To keep the pixels
of you from my screen the way the tiny lights of your body
turned out — One, by one, by one.

In the story the woman hits the rabbit on the way home to her husband
from her lover’s. What does the rabbit symbolize?

Fertility, a student says. Maybe she wants to get pregnant by
her lover. The death of a new beginning, says another. Maybe

she can’t really leave her husband and just start over. Maybe
the rabbit dying means that she is pregnant like old pregnancy tests

used to be. Some students look doubtful. They have peed on sticks
that show lines or plus marks, kept the time on smartphones.

The rabbit was white, says another. It is true. In the story,
it was snowing. No way she could have seen a white rabbit.

The student continues, Maybe it’s the death of purity. Other
students like this theory. But the story doesn’t say for sure

it’s a rabbit. She thinks that she hit a rabbit. It might have been
a cat or a dog. She looks in her rearview mirror and keeps

driving. It’s definitely symbolic of an ending. She can’t go back.
What I don’t tell them about is my own rabbit. That I had been

drinking. That at 55 mph on a country road, the rabbit panics
and runs straight toward your headlights. I don’t tell them

that after this you are just as panicked as the rabbit. Who
can you tell about this? How to explain where you were,

what you were doing driving three beers in at that hour.
Maybe the rabbit saw the light as a rabbit hole. Maybe

it reminded him of first opening his eyes at six days old.
Maybe he saw it as his escape to another world, one free

of coyotes and harsh winters. The way I always saw a man
as an escape hatch to another world because

I was raised to. The way girls were given by their fathers
to a husband to a grave and that was the only story. Until

a man just became an escape hatch to another man,
and all the worlds were eventually the same, this one

with more yelling or less than the previous one, and me
with no way to make a world of my own because I didn’t know

how. You keep this rabbit hidden for years from anyone
wondering what it could possibly mean.

We were desperate sex in girls’ bodies.
We were girls mothers warned sons about.
We were handcuffed together to a bed at a party.
Sent home together in a cab from a field trip.
We were barns burning for anyone’s love.
We were lonely walks to the cemetery & talking to graves.
Blowjobs behind tombstones. Always hoping
to get caught. Always dreaming of escape.
We were talks on the hood of a car. Dreaming
up early dramatic deaths. Scared shitless
of ending up pregnant or poor or fat
or all three. We were learning to drive
a stick shift on gravel roads while eating
ice cream. Flirting for freebies from sweat-
nervous boys at restaurants. We couldn’t have
lived any different. We couldn’t have saved
one another. We were just trying to survive
the only way we knew how.

THERE ARE NO (SIMPLE) HAPPY ENDINGS

Every fairy tale requires the absence of mother.
Possibly the presence of stepmother. But where
did the mother go? Dead in fever-dream, my dear?
Lips burning prayers to Jesus, your tiny palm
pinning a cool cloth to her forehead?
This is a different story. The Tale
of the Mother Who Left.

Every day the same. Putting the food in,
cleaning up what comes out. A child
is a type of worm in its infancy.
But a worm everyone seems to adore.
Strange larva, always wanting more.

There is the crying-crying-won’t-stop-crying
melon-thud of head into wall. Ohmigod, I’m so
sorry, Ohmigod I’m so sorry. But then the stunned
beauty of silence. The calm call to the police.
Waiting in the sun and fresh air of the new world
outside of the screaming—

Or petal bloom of blood
underwater. Crush-metal of car into concrete.
All the mother ever wants is silence. All she
wants to be is alone. To drown in the river
or whisky, to marry the knife or the pills. To free-
fall eight stories, but with or without
the baby?

And this is where we learn
The Mother Who Left is hero / not monster.
To walk away, board the bus, step up
into the cab of the big rig, telling the trucker
Thank you. I’ve just got to get out of here
is the same story as giving the child love.

“Someone I loved once gave me a box full of darkness.
It took me years to understand that this, too, was a gift.”
—Mary Oliver

I have become a lover of solitude.
Feeder of finches, savior of starlings
and sparrows. After you, I no longer
want to be human. I will be woodsprite.
River imp. I might believe in love
when I become a river otter, a dove.
All of the pressure of human relationships
is too much. It has been the one fantastic
failure of my life. The one puzzle piece
I’ve never been able to make fit.
Once, after a poetry reading, a past life
regressionist said to me, “We need
to find out what makes you attract
this type of man.” I didn’t go because
I’m rebuilding myself very deliberately.
I would have wanted her to tell me that
I’m still not fully human — that that’s why
I haven’t figured human love out.
That there’s been a terrible mistake.
That it will never have to happen again.


—all from Shaindel Beers’ Secure Your Own Mask, White Pine Press (2018)