—after the painting by Richard Diebenkorn

I’m walking east down Lovell in Kalamazoo
in the middle of the afternoon, and it’s hot, July
something, and there’s a man sleeping on the sidewalk—
the way you would in your bed—his body a kind of Z
in a fancy serif font, the curlicue of hands
beneath his head at the top, and the toes of each foot
curved to comfort the other, at the bottom. At first
I don’t know if he’s alive or dead, his skin
the color of burnt iron, a darkness alcohol finally brings.
I remember him from months before, a couple of blocks
west of here. He leaned against my car and wanted
to borrow money, a loan. He wanted a ride to South Haven
where he could get the money to pay me back.
His voice had that desperate familiarity that says:
You know me. You must want to care for me.
I think I gave him something, not much, and drove away.
I couldn’t forget his face, murky with solitude,
like the hard red clay in Oklahoma where I grew up
that won’t grow anything—everything lost to erosion
that brings such desolation you can’t survive.
I thought he wouldn’t survive more than a week or so,
but here he is, and when the cops arrive they know him,
call him Billy, and he’s still alive, maybe
for the last time, and they pick him up.
I head east again, turn left into the cool museum
where I lose myself, sometimes, where I find you
sleeping where I’ve seen you before, paint streaming
around you like water, gathering in the shallows
of your dress. I am always surprised to see you.
I don’t know. Are you flesh, or water? if I move
you will disappear in a startle of color.
The gallery is almost dark—those new-fangled spots
that keep the viewer anonymous—but your face turns
toward me from the crook of your doubled arms,
all about you an unemcumbered sway, an intelligence
of light explicit as a summer evening. Deer quietly chewing.
I balance, in the shadows, between. 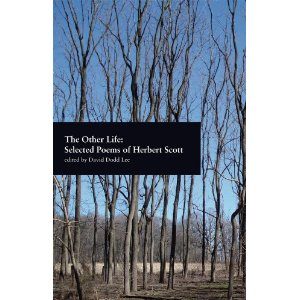 That is easily my favorite Herb Scott poem; it is the one, when asked, or when I think of him, that I turn to. My first exposure to him was through The Other Life: Selected Poems of Herbert Scott, edited by David Dodd Lee. I devoured this book upon its purchase, and read it again and again, before entering the MFA program at Western Michigan University. Since attending WMU, and volunteering and working at New Issues Poetry and Prose, I have realized the impact one poet can have on a literary community: the friendships, the press, the poetry, sharing the word; he was one of the hinges on which everything ran. I never met him, but my praise for New Issues is never-ending, and his poetry continues to startle me. He challenges me as a poet, and as a member in this community; it’s a gift I wish for all other poets, all other writers, as long as there are literary communities.

Herb, today would have been your 84th birthday. It’ll never be enough, but I like to think turning to your work, raising a glass of white wine, and thinking about what I can do in the literary communities I touch to make them better, I’ll be able to do a fraction of what you’ve done, and continue to do.

← Tomorrow!! At the Kalamazoo Institute of the Arts!! Reading Allan Peterson →