“My Face Resembles / The One Reflected in the Water”: Reading David Dodd Lee’s And Others, Vaguer Presences 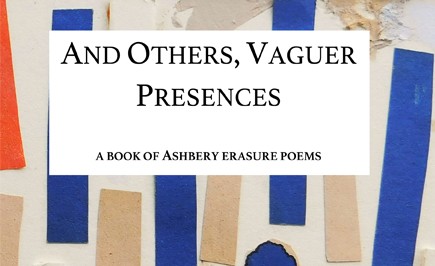 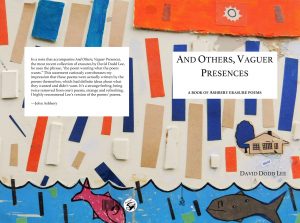 The thing that I love about erasure poetry is how interactive it can (and should!) be with the original work it is pulling from. I think, for some writers who attempt this form, the goal is to reinvent the words that are on the page, than to accept them and attempt to draw something new out of the woodwork. But I find this to be problematic: if the writer chooses to engage with another writer’s work, and distance their resulting works from it, what are they truly accomplishing? How have they challenged themselves? What are they implying about the original work?

On the flip-side, when the writer takes what the other writer has done, celebrates it, and points out some of the facets we may have missed in the previous work, by performing this erasure, then I believe those writers are onto something. And I believe this is where David Dodd Lee comes in, with the two collections of erasure poetry he has compiled of John Ashbery’s extensive work. Just as Ashbery himself notes in the blurb for this second collection, that the poems “were actually written by the poems themselves, which had definite ideas about what they wanted and didn’t want” (2017). This suggests to me that David Dodd Lee not only remained true to what he believed John Ashbery had originated on the page, but he created new poems that were reflective of what he believed the original poems wanted to be.

Whatever John Ashbery’s original intentions with his work—that question could easily take up a series of blog posts in and of itself!—the poems that Lee generates in their place are energetic, intense, and surprising. True to the persona of a Lee poem, they are nature-centric, imagistic, and politically-focused. Much like John Ashbery’s poems, these new erasures examine relationships, specific memories and images, and where we fall within nature ecopoetically, as well as where we live within the political landscape.

To explore these ideas in more detail, I have selected one of my favorite poems from the collection, titled “Summer,” and based on John Ashbery’s poem, “The Double Dream of Spring.”

There is that sound
like forgetting
somebody
time hardly seen
the twigs of a tree
the trees of a life
We,     among all others

And suddenly,
to be dying
a little mindless construction
of pine needles
and winter
of cold stars
and summer

I step to a narrow ledge.
My face resembles
the one reflected in the water.

Isn’t this lovely? This is truly one of my favorite poems from the collection, for its imagery, use of white space, and what it reflects in, both, Lee’s and Ashbery’s work (again, my favorite form of erasure—when it can reflect both of the writers involved). I admire the work that goes into erasing poetry, and I’m definitely of the mind that the work should still embody that work from which it has borrowed, and I think that’s achieved here rather wonderfully. First, the opening phrase, contained in the first three lines of this poem, are highly reminiscent to me of my all-time-favorite Ashbery poem, “At North Farm,” which opens with, “Somewhere someone is traveling furiously toward you.” This line has stayed with me for years, from the first time I ever gave that poem a read. There’s something about the combined certainty of both of these phrases, in Ashbery and Lee’s work, as well as almost the removal of agency from the persona at hand: we can’t help that someone is approaching, much like we can’t help the process of forgetting. Both of these things seem inevitable, and hardly memorable or noteworthy most of the time, but there is both trouble and comfort to be found in that inevitability.

Second, I’m very interested in how this poem works visually, and what both white space and short lines bring to John Ashbery’s work. Admittedly, I’ve always read his work very slowly, and I read more pauses into his lines than is technically warranted by how the poems are laid out on the page. However, I think there’s something that can be said for that—their density and complexity, their need for breath. While it could be argued that Ashbery’s poems could be laid out differently to better encapsulate their imagery and movement, which I think is on the list of what Lee has achieved here in his retelling, I think it’s important, too, to recognize that density is as welcome in a compart form as in the sparse ranges that so many of us now seek out in our most contemporary reading cycles. I think on some level this is addressed through Lee’s embodiment of these poems, in his repurposing of the longer lines into something more minimal, but still rich with imagery, question, and complexity.

Finally, from a thematic angle, both of these writers spend admirable amounts of time exploring and celebrating nature, and our place within it, while also addressing many of our vulnerabilities, both ecopoetically and politically. In this poem that I’ve shared above alone, there are questions about our dealings with memory, as well as our approach to death, and our recognition of ourselves at various stages in our lives. These are topics with heavy, underlying questions that both of these poets have tackled beautifully and even ruthlessly in their own work—so it only seems fitting that such questions would appear in the crossover of erasure. They are themes that can be troubling, yes, but are important and should be addressed nonetheless—and I believe how they are arrived at in these erasure poems is both organic and surprising, leaving us with twinges of their intensity and rereading for more.

Whether or not you’re new to the process of erasure poetry, or John Ashbery’s work, or David Dodd Lee’s work, I think this collection can be a wonderful starting place for the reader interested in investing in one or all. These poems are highly indicative of both writers’ breadth and quality, as well as the extensive process that goes into well-written erasures. If you aren’t so new to the process or these poets, you’ll bring with you hindsight that highlights some of the more secret elements of these poems, and what they illuminate about each poet. Basically, if you haven’t read this collection yet, there is a reason for you to do so—and then you’ll more than likely find, like me, that you immediately want to read it again, more slowly this time, because the ideas and images always seem to keep going, rather furiously, and the last thing you want to do is miss a breath.