“Silence, silence…which is in me / like a hill”: Lessons to be taken from Robert Creeley 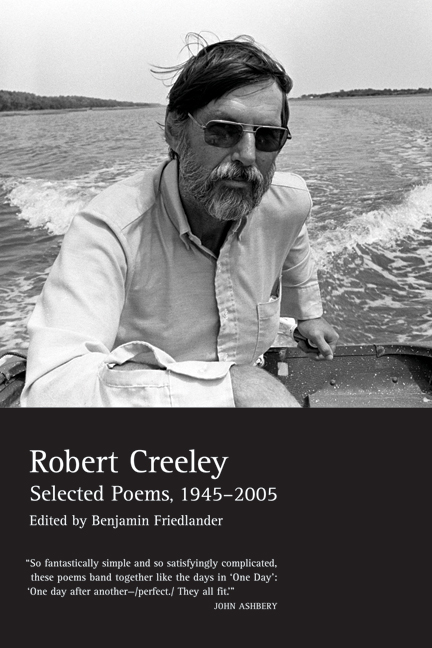 Admittedly, whenever I sit down to read “one of the greats” for the first time, my inner-skeptic finds her way out and asks, “What’s with all the hype?” I ask this question not for the sake of propelling myself forward, or of devaluing late-writers, but for the sake of asking what contemporary writers should be taking from their predecessors. Especially the ones widely marked as “great.”

While I like to see myself as well-read, there are still some significant holes in the foundation of my reading (at least to any great extent) of these predecessors—Gertrude Stein, Ezra Pound, and Robert Creeley, to name a few. These writers, along with John Ashbery and Robert Hass (again, to only name a few) are among those that I either have or will question and/or challenge when I first turn to their work. When I sat down with Robert Creeley’s Selected Poems, 1945-2005, this afternoon, I went in only having read a few poems previously, knowing a lot of opinions about the writer’s work and feeling skeptical about whether or not his work would meet the demands of all the praise.

In a word, no—I was not disappointed.

Referring first to the title of my blog post, Robert Creeley’s work offers many lessons to his readers who are also writers; and these lessons are written well enough to be taken note of and are subtle enough to be ignored (if the reader so wishes). Beyond simply admiring the wide range in Creeley’s writing style and topic choices, I admired the ways in which he described the Body and, oddly enough, the Weather, as well as his meta-critiques of language, and even built-in lessons on such writing provisions as enjambment.

In looking specifically at Creeley’s exploration of the body and of weather (or natural conditions, to expand the view), his stance on the relationship between the body and nature, or humankind and nature, becomes clear: they are interconnected.

THE DEATH OF VENUS

I dreamt her sensual proportions
had suffered sea-change,

that she was a porpoise, a
sea-beast rising lucid from the mist.

The sound of waves killed speech
but there were gestures –

of my own, it was to call her closer,
of hers, she snorted and filled her lungs with water,

then sank, to the bottom,
and looking down, clear it was, like crystal,

Reading a poem such as “The Death of Venus,” the poem is both about the exploration of a woman and the man’s relationship with her, but also the mysteries of that relationship, both unpacked and complicated further through the use of metaphor. There is also a sense of enlightenment through nature, when the man seems to see the woman through the water “clear [as] it was, like crystal” for the first time, clearly (58). This enlightenment is similarly carried over into other poems and is also used as a form of explanation for worldly issues. The poem, “The men in my life were…” describes, first, the male role models or influences in the narrator’s life, but the scenario is then complicated and expanded upon through the final two lines:

The wind rises in a
fucking, endless volume. (139)

In looking at a poem such as this, the initial explanation may be a simple listing of male familial figures; however, ending on a note of nature’s sheer size and endlessness, the relationship between the narrator becomes, both, violent and seemingly hopeless. Using nature’s conditions as a means to describe and complicate the layers of relationships seems to be one of Creeley’s many talents, and though this first Selected compiles poems from a series of sixteen individual poetry collections, this method of relating the body with nature is not exhausted.

However—not only does Creeley model the use of nature in poetry effectively, there are also many other writing lessons that can be taken, simply by looking at what Creeley does within the context of a poem—take, for instance, his poem, “3 in 1.”

The bird
flies
out the
window. She
flies.

The bird flies
out the
window. She
flies.

The bird
flies. She
flies.

Granted, this poem is still largely about nature, and there are even implications placed on the female body, through the use of “she.” However, a poem such as this one also teaches the reader something about the importance of enjambment, in that the first two sections are identical, other than their spatial integrity. In the first section, “the bird” is somewhat removed from the action of “flies,” as if she has not yet flown, though the second section more immediately suggests the bird’s current motion. Finally, in the final, reduced section, “the bird” and the pronoun “she” are directly paralleled after being visually separated by “out the window” in the preceding sections. Now, why is this important? After all, if the decision is ultimately left up to the writer about where to place the line break, or how to use

why should the writer, in a sense, point out that he is making these decisions? Perhaps in a poem such as this one, the intent could be used as a means to suggest motion to the reader, in a sort of step-by-step form. Then again, it also provides the reader with a reminder of the importance of line breaks and enjambment, despite whatever Creeley’s intent might have been.

Though these are very minor, and brief, explanations of some of what Creeley has provided to writers, a review such as this one is only meant to provide a snapshot, and can only provide a snapshot, of what such a profound writer has done. In the words of John Ashbery, “these poems are “so fantastically simple and so satisfyingly complicated [that they] band together like the days in ‘One Day’”:

One day after another –
perfect.
They all fit.

And to add one final thought to Ashbery’s account, these poems, just like days, can all be perfect, and can fit perfectly together, if the reader has an open mind when sitting down to ask the question, “What’s with all the hype?”