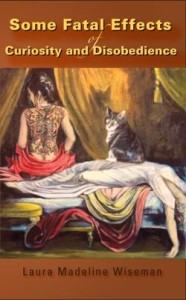 Click here to see my review of American Galactic.

You’ve heard the stories—two children lost out in the woods, little girl in a red-hooded cloak, three little pigs—we all have. And, admittedly, I have “red” many poetry collections (whether or not intentionally) that focus exclusively on the fairy tale, though I have never read a collection that so keenly focuses on one single fairy tale as Laura Madeline Wiseman has here with Some Fatal Effects of Curiosity and Disobedience. Her exploration of Bluebeard through his wives’ eyes is all at once emotionally stunning, original, dark and unsettlingly haunting. By channeling the Bluebeard tale through fairy tale and pop culture, we can’t help but see this as a domesticated, though contemporary, reference to Bluebeard as an abusive, domestic husband, or view his wives in their various stages of abuse, grief, victimization and vindication.

Now, just in case you’re like me, and “Bluebeard” was not included in your nightly fairy tale repertoire, here’s a summary (of one version of the story): Bluebeard was a nobleman with a blue beard, which marked him as murderous. Among three sisters, the youngest, Fatima, agreed to marry him and was given a key for each door in the home, though she was instructed specifically not to open one particular door. Upon the visit of one of her elder sisters, Anne, she agreed to satisfy their curiosity, unlocked the forbidden door, and discovered a room with a floor covered in blood and all of the Beard’s former wives’ bodies hung on the walls. As is customary to the fairy tale, the women were then caught in the act by Bluebeard himself, though their brothers arrived just in time to dispatch Bluebeard and save them.

Typically, when I happen upon a collection of poems that focuses on a fairy tale or series of fairy tales, I become skeptical, because—let’s face it—there are only so many ways to spin an already-well-known tale. In the case of “Bluebeard,” there are only so many ways to spin the keys, the allure of the forbidden room, the blood and the death of Bluebeard. However, Wiseman does a remarkable and intuitive thing: she structures the collection through the eyes of the three sisters, taking us through the reign of Bluebeard upon meeting them. The collection is constructed in three parts, through one sister’s point of view at a time, framed in with a foreboding little-did-she-know poem, and followed by what I’ve decided to refer to as an Epilogue. While this doesn’t sound nearly as great as it actually, structurally is, the collection is beautifully sound and lovely, and it really transforms the Bluebeard story into something contemporary.

And what ends up being so, so great about these poems is their emotional depth and severe, honest and raw complexity—particularly in part 1, with the first sister, in my opinion. As is portrayed in many versions of the story, Bluebeard selected the youngest sister as his wife, because she loved him (unlike the older sister, who was more beautiful but hated him)… and we see this tremendous unraveling of love and passion, intertwined with rage, pain, violence and danger. Especially for those who know the tale, who know the potential ending means death for the youngest of the sisters, we ache at her emotional complexity, and at her ability to continue admiring such a dark figure. So, too, can we admire the extensive shift from love to loathing, and perhaps we even have it in us, too, to empathize. Add on top of the well-written sentiment beautiful images and powerful decisions in lineation (which often generate unusual, and overly-satisfying, surprises), and we are transported through poetry that is truly powerful and transformative—of our ideas about domesticity and contemporary relationships, let alone of our understanding of this fairy tale.

Laura Madeline Wiseman has a unique gift and power over taking an unusual, typically short-handed topic, and taking it to a new place—giving it time to marinate, open up and complicate. Whether it’s providing new material to an age-old fairy tale or challenging our beliefs and faith-driven prophecies about life from other planets, Wiseman offers up poems that are meant to make room in our psyches and mess with our neurons, challenge our understanding and make us feel something new. Some Fatal Effects of Curiosity and Disobedience is yet another collection of Wiseman’s that I love, and recommend. Whether or not you’re into fairy tales, and whether or not you are interested in the Bluebeard story, this collection will teach you something about relationships and the domestic with its pop culture references and transformations of the inner-workings of relationships. Take the time to read this; it’ll challenge you, and you’ll thank it for that.

LAURA MADELINE WISEMAN is the author of the full-length poetry collections Drink (BlazeVOX Books, 2015), Wake (Aldrich Press, 2015), American Galactic (Martian Lit, 2014), Some Fatal Effects of Curiosity and Disobedience (Lavender Ink, 2014), Queen of the Platform (Anaphora Literary Press, 2013), and Sprung (San Francisco Bay Press, 2012). Her dime novel is The Bottle Opener (Red Dashboard, 2014). She is also the author of two letterpress books, nine chapbooks, and the collaborative books The Hunger of the Cheeky Sisters: Ten Tales (Les Femmes Folles Books, 2015) with artist Lauren Rinaldi and Intimates and Fools (Les Femmes Folles Books, 2014) with artist Sally Deskins. She is the editor of Women Write Resistance: Poets Resist Gender Violence (Hyacinth Girl Press, 2013). She has a Ph.D. from the University of Nebraska-Lincoln in English and a M.A. from the University of Arizona in women’s studies. Currently, she teaches English and Women’s and Gender Studies at the University of Nebraska.