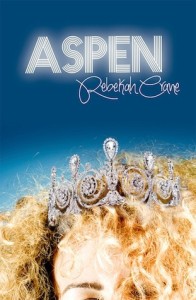 Let me point one fact out from the beginning: I admire young adult literature, and I believe it can be extremely powerful when the central characters are confident, self-possessed individuals, dealing with both personal and more widely-recognized issues. Rebekah Crane’s Aspen does not fall short of this; rather, as I will delve into in more depth later, the complications presented to the characters and to the situations that might otherwise be deemed ordinary or predictable set the stage for an example of YA literature which far exceeds that of the average teen story.

On the surface, this is a story of the grieving and coping process as it appears in one high school after the loss of a beautiful, popular soccer girl, who inevitably has a secret. Set against the backdrop of Boulder, Colorado, and with a fixation on a more “hippie” lifestyle (mostly realized through Aspen’s mother, Ninny), though, what could be dismissed as simple grieving is complicated with its juxtaposition against the hippie lifestyle. Though this lifestyle is only truly realized through one character in the book—and a supporting character at that—the characteristics of what we expect from the stereotypical hippie lifestyle echo throughout the novel: the expectation of freedom and free thinking, drug use and freedom of expression. Perhaps it would seem, from the outside, as if the grieving process would be even easier to move through with this sort of open-minded system as a background. However, because of the secrets tied up in Aspen’s survival and the loss of Katelyn, the hippie lifestyle becomes a dramatic irony in Aspen’s, and her friends’, grieving process. Freedom is overshadowed with grief; drugs (though seen by some as a positive outlet and coping source) are given a dark demeanor with little positive outcome; and freedom of expression (both verbal and sexual) is complicated, given obstacle and can hardly be portrayed as free, whether in the sense of ability to express, or in the practicality of consequence. This severing of what it means to be free, via so many avenues, is highly complicated and rich for a YA novel and provides many opportunities for young adult readers to think and ask questions, and for adult readers to similarly analyze and discuss.

As if these complications to the background were not enough, Crane also successfully developed a story that is female-centric and contains strong supporting female characters. Aspen is quirky and self-taught, intelligent and self-possessed, and deals with some form of PTSD throughout the story, juxtaposing lines of psychology with her talent for art and fascination with memorizing definitions. Her mother, Ninny, is endearing but largely helpless throughout most of the story, further enhancing Aspen’s usefulness; however, at the end of the story, she is given a moment of redemption and makes attempts at improvement, both as a mother and as an independent individual. Aspen’s two friends, Kim and Suzy, fulfill two sides of a conformist coin: the non-conformist Kim and the popular girl Suzy, though they both contain their deviations from these standard, flat profiles. While Kim is largely against conformity herself, she still struggles with conforming to her mother’s wishes and poses indirect questions about her relationship with her ethnicity. Suzy, too, complicates what we view as the standard, hateable popular girl, functioning as an extremely kind, caring and genuine individual who is anything but shallow. Perhaps the most problematic female character is Katelyn, since her story is largely revealed via others’ voices, and her presence throughout the novel is largely a projection of Aspen’s fears, rather than Katelyn’s reality; both of these aspects offer up questions about her personal agency, though such a portrayal does also fit within the context of the grieving process and contains echoes of a teen ghost story. With such interesting characters throughout, all at once with their roots in an easily-definable character mold, their exceptions and complications pair easily and well with the complications of the backdrop of the story, reminding us constantly that appearances and expectations are hardly ever what they seem.

As a final example of this phenomenon, there is budding relationship between Aspen and Ben—Katelyn’s boyfriend. How could a teenage relationship become more complicated than that—a relationship between the guy with a dead girlfriend, and the girl who survived the accident? Though some readers may view their relationship as predictable, seeing as how it begins to develop at the beginning of the story and gradually escalates throughout the rest of the novel, I found it to be endearing. While it is predictable for a love interest to be included in a YA novel, I also found their relationship to be believable and likeable, since both characters needed someone in their life who was more immediately connected to the accident, who might more intimately understand and contribute to their personal grieving process. Relationships in YA literature often become problematic, due to their predictability and over-emphasis within the plot, but I found myself defending this particular relationship on the grounds of coping (which also contains a strange echo with Ninny’s coping mechanisms, as a healthier form of how Ninny chooses to lead her life). What’s interesting, too, is how the complications of this novel are threaded through this relationship, largely as an example of the lack of freedom and the consequences of attempting to enact freedom.

What becomes so endearing by the end of the novel for me, though, is how these characters, this central situation, and this relationship, could be viewed as normal, but are then complicated, through the backdrop lens of the story, and when placed up against one another. It ends up being a very interesting read, one worth reading, and one worth getting intellectually and emotionally involved in. I found myself anticipating what would happen next, and how the characters would react; and more importantly, I found myself asking questions, pondering my position on their situations, and what comments this novel might be making about the larger global issues of the grieving process, coping, and even how social media now plays a part in the grieving process! It was truly a fascinating read, particularly within a genre that is all at once so problematic but so extensively full of potential.

REBEKAH CRANE fell in love with YA literature while studying Secondary English Education at Ohio University. After having two kids, living in six different cities, and finally settling down in the foothills of her beloved Rocky Mountains, her first novel, PLAYING NICE, was published. ASPEN, her second YA novel, set in Boulder, CO, was released in summer 2014 from In This Together Media. She now spends her day carpooling kids or tucked behind a laptop at 7,500 ft high in the Rockies, where the altitude only enhances the experience.

← Preparing the Way for My Daughter: Reading Lori Day's Her Next Chapter A Unique Design of Women and Culture: Reading Desiree Zamorano's The Amado Women →